Looking for the headstones of your ancestors is a primary part of genealogy. What do you do if you can’t find one? Here are some answers.

Looking for the graves of our ancestors is a basic part of genealogy. The headstones provide a tangible link between us and those who came before us. It is something… and often the only thing… that we can touch that is intimately associated with that ancestor. Standing on the ground over which their earthly remains lay is as close as we’ll ever get to the more ancient ancestors we never personally knew. Finding the grave puts a bookmark at the end of that particular ancestor’s story (and it’s up to you to fill in the details in the beginning and middle of that story through additional research). It also tells you a lot about where that ancestor lived and what his or her life might have been like in that place long ago.

But what if you can’t find the grave? Not everyone has one that is easily located. Some may not have one at all, such as if they were buried at sea (or lost at sea) or were among the missing in a war (in which case, all you may know is that they are buried on the battlefield somewhere). Here are some of the most common reasons why you may not be able to easily find a grave or find one at all, and what to do about it.

The Town Where Your Ancestor Lived Had No Cemetery

This was not uncommon in early colonial times, and sometimes even into the later colonial era. Pioneers to the West in the mid to late 19th century may also have encountered this problem. If there was no town cemetery, your ancestors had two options for burial:

1) Use the Closest Cemetery

The closest cemetery may have been a town or even a few towns away. As long as a funeral procession could get there and back on foot in a day, the person was usually buried there. So, if you’re looking for a headstone for your ancestor in the town in which they lived and can’t find one, try looking in cemeteries in neighboring towns. Even if the town has a cemetery now, it may not have had one during the time of your ancestor. Such was the case with Salem, Massachusetts. For the first decade or two of its existence, it had no cemetery. People were taken to Ipswich for burial in the ancient cemetery there instead. Salem had its own cemeteries by the 1660’s, but early colonial ancestors were probably buried in Ipswich.

2) Use the Family Property

This was another common option when a cemetery wasn’t available nearby (or plots in it were too expensive to purchase). Roadsides and even some front and back yards of private houses all over New England have these little family cemeteries, which are protected by the state. In many cases, though, no headstones were used. In order to know if your ancestor was buried on private property, you will need an obituary or some other ancient document such as a will to prove it.

The Headstone Is No Longer There (or Never Was)

In really old cemeteries, vandalism and weathering have been problems. Many of these old cemeteries have broken headstones or ones that can no longer be read. I ran into this in Gloucester, Massachusetts in the town’s oldest cemetery. The vast majority of the stones were either broken or unreadable. While I did find a headstone for my ancestor there, it was a new one, put up by modern descendants. A railroad track had been built through the cemetery, and the actual burial spot of my ancestor was believed to be under the track or in the woods beyond it, where the cemetery used to extend.

Some graves originally had headstones, but they were made of wood, and destroyed through weather or vandalism or age-long ago. Other times, no headstone was ever there, either because the ancestor’s family couldn’t afford it, or, as in the case of Quakers, their religion preached against headstones as symbols of vanity.

If you think your ancestor is buried in a particular cemetery, but there is no headstone (or no readable one for you to be sure it’s him or her). you can go to the town hall or town historian to see if they have a map of burials in that particular cemetery. If they do, you can use the map to find the grave. If there is no map, as is the case with most ancient cemeteries, you may never actually be sure of the exact spot your ancestor is buried.

If you can find an obituary or will that provides the information, you will at least know they are there somewhere. If it is the only cemetery to exist in the town when your ancestor died, you can also be content knowing they are there, and you visited the place, even if you didn’t find the exact location.

While it can be frustrating to not be able to find a headstone, it is a jumping off point for doing additional genealogical detective work. A headstone may, in fact, exist, just not where you expected it to be. It is your job to track it down. If there was a headstone that is gone now, or if there never was one, you might be able to find a map showing where your ancestor is buried in a particular cemetery. If not, knowing the cemetery they are most likely to be in and visiting it to pay your respects to your ancestor is the most you can do.

It’s not like having a headstone you can touch or stand over the ground where your ancestor is, but you at least will know you walked on the ground where their relatives once stood when they brought the person there to be buried. Even standing in the probable cemetery where your ancestor is buried is a link to them and the past in its own unique way. 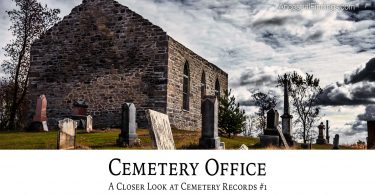 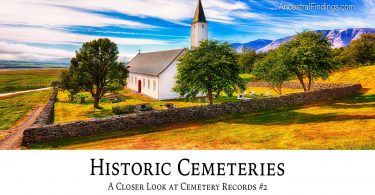