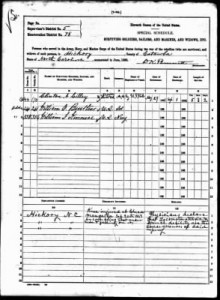 Veteran’s schedules were forms that the census takers had with them when they were taking the regular population count. In 1890, these extra veterans’ schedules were meant only to record information about Union soldiers and their widows. However, many census takers also recorded information about Confederate soldiers, as well as soldiers who served in different wars, including the War of 1812 and the Mexican-American War. You should note that these veterans’ schedules are often used as a partial substitute for the 1890 federal census, because the federal government’s copy was destroyed by fire. Fragments of the 1890 census may exist in state and local repositories throughout the U.S., but they are difficult to locate and not complete. While not listing everyone who would have been included in the 1890 census, the veterans’ schedules are a partial head-of-household list for those who were old enough to have served in the Union Army during the Civil War. States represented include AL, D.C. IL, KY, LA, MD, ME, MI, MS, MT, NC, ND, NE, NH, NJ, NM, NV, OK, OR, RI, SC, SD, TN, TX, UT, VA, VT, WA, WI, WV, and WY. In addition, there are a few records from the states of CA, CT, DE, FL, GA, ID, IN, KS, MA, NY, OH, and PA.