If your ancestor claimed homestead land in the mid to late 1800s and early 1900s, you may potentially be able to find a treasure trove of personal information on that person and their family in their application for title to the land.

Another type of land record that you should be looking at is the homestead record. In the late 1800s and early 1900s, the US government gave away a lot of its federally-owned land to people who wanted to settle in sparsely populated places. This was land that had not previously been owned by anyone, except maybe as tribal land for Native Americans. Often, the land was located in places where the primary population was still Native American. The US government wanted to get citizens in there to build it up and establish it as firmly American land. To do this, they gave it away for free.

Naturally, there were conditions attached to homestead land. The person applying for it had to live on it for a minimum of five years, and work diligently to improve the land during that time (usually through farming, but sometimes through other means, such as real estate development or something else). The land was essentially free, as long as those conditions were met. If they were not met, the homesteader would lose the land, and the federal government would distribute it to someone else. This encouraged a lot of westward movement in this country. There are still a few, isolated places in the United States that give out homestead land today, mostly in Alaska, but sometimes in other places in the western part of the country.

To claim a piece of homestead land, one only had to be the first one to get there. Once there, signs, posts, fences, and other means of establishing that the land was theirs had to be erected. That way, no one else could claim the homestead land. There were usually general areas of homestead land, and people wishing to claim it could claim as much as they liked within the designated area. They were responsible for improving all of the lands they claimed, though, so it was important that they not claim more than they could successfully work.

If homestead claim disputes arose between two people who were each claiming the same land, or claiming part of someone’s claim infringed on someone else’s claim, there were courts that could deal with it. Often, though, the disputes were dealt with personally. Once the land had been lived on and worked for the minimum required number of years, the person who claimed it could apply to the federal government to obtain a free and clear title to it. The government would investigate these applications, usually obtaining written testimony to what the person did for a living, who their family was, how long they had been on the land, and what they had done to improve it. This was usually done by interviewing the claimant, plus at least two neighbors with direct knowledge of the claimant.

This is where you can find fascinating information in land records for homestead land. The testimonies in the homestead land applications are often detailed, with personal details you might not find anywhere else, and they come directly of the people with the most intimate personal knowledge of the claimant and the land he or she was claiming.

You can find out if your ancestor claimed homestead land by looking up their name in the online database at the US Bureau of Land Management website. If the name appears there, then they claimed one or more pieces of homestead land. You can then send away for their applications. Older ones have less information in them than newer ones, typically, but they all have valuable personal information on your ancestor that you will want to include in your genealogy research. 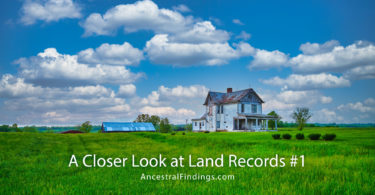 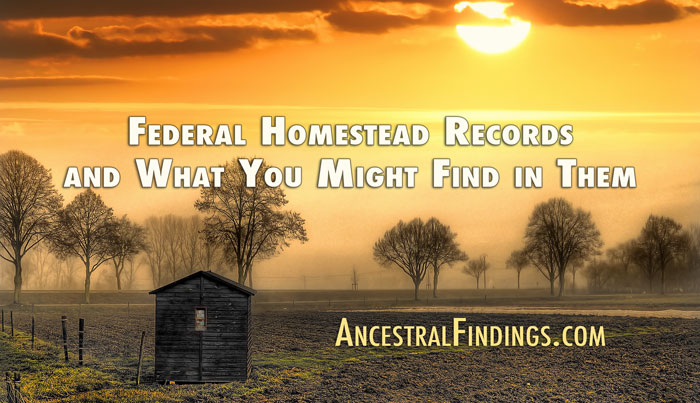