Eleanor Roosevelt was more than just the 32nd First Lady of the United States. She was a force of nature. From her hard childhood to the unconventional nature of her relationship with her husband, Eleanor re-defined what it meant to be First Lady. Here is her story.

Our 32nd First Lady had the same maiden name as her married name. Born Anna Eleanor Roosevelt on October 11, 1884, in Manhattan, New York City, New York, she would go on to marry her fifth cousin, one time removed, Franklin Delano Roosevelt. However, before that, she had to get through a difficult childhood first.

She chose to be called by her middle name Eleanor from a young age, and those around her obliged her. Eleanor had two younger brothers, Elliot and Hall, and her parents were New York socialites. With her father, Elliot Roosevelt, Sr. being a younger brother of former US President Theodore Roosevelt, Eleanor was part of American royalty from the beginning. It didn’t protect her from hardships at a young age, however.

Her mother, Anna Rebecca Hall, nicknamed Eleanor “Granny” when she was still quite young because Eleanor grew up with such a serious nature. Anna was also embarrassed by Eleanor’s plain appearance, as the family were socialites and expected to be people the less fortunate could look up to in every way; physical attractiveness was expected.

Eleanor’s mother died of diphtheria a day apart from each other in December of 1892, when Eleanor was only eight years old. Her brother, Elliot, Jr., died of the same condition in May of the following year. Her father died in August of the next year, having become an alcoholic and confined to a sanitarium; he jumped from one of the building’s windows during a fit of delirium brought on by alcohol withdrawal. Though he survived the fall, he had a seizure later as a result of his injuries and died following that incident, making his death attributable to the fall.

At ten years old, Eleanor, along with her younger brother Hall, was an orphan. Because of these early experiences, Eleanor suffered from depression throughout the rest of her life, and Hall later became an alcoholic. Before he died, Eleanor’s father asked her to act as a mother to Hall, which she did. She accompanied him as a chaperone when he enrolled in Groton School in 1907, wrote to him almost daily, and rejoiced when he graduated with a Master’s degree in Engineering from Harvard. She did, however, express regret that Hall did not have a better childhood. 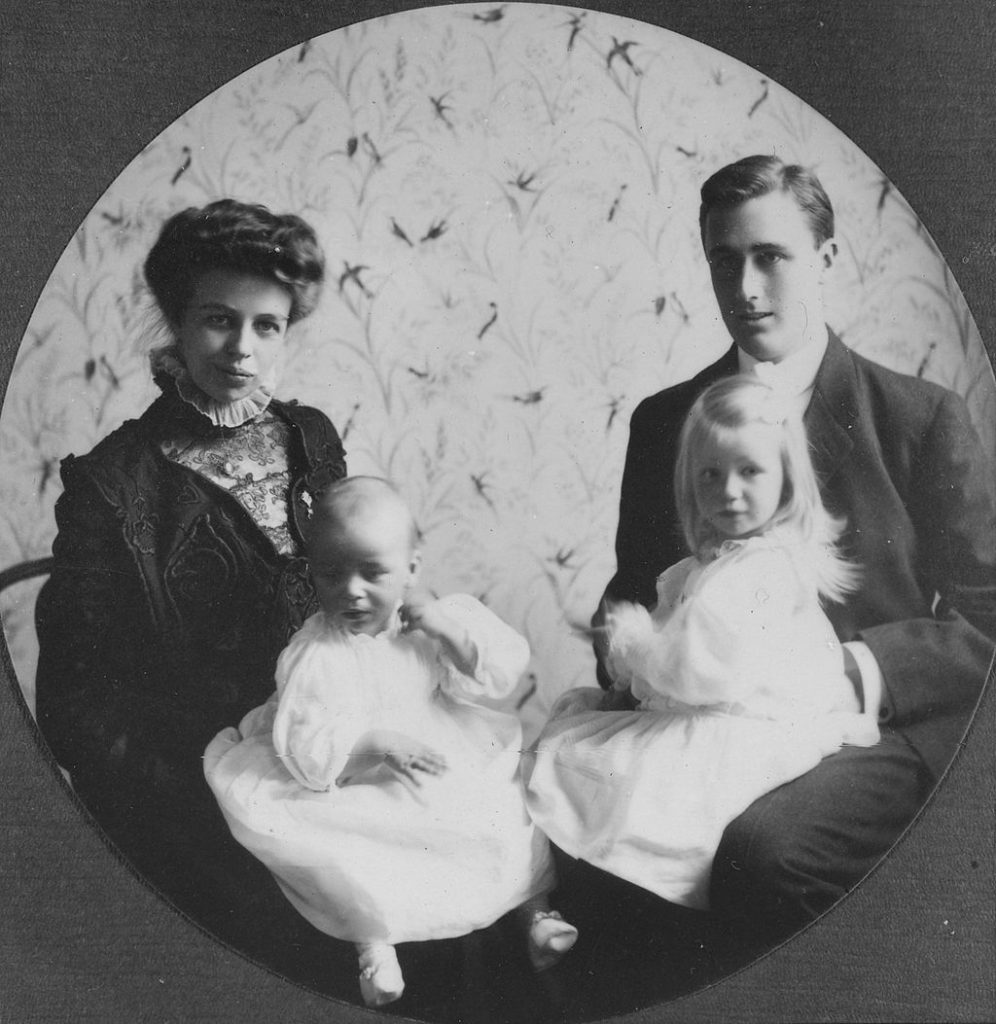 Eleanor and Franklin with their first two children, 1908 (Wikipedia)

After losing her parents, Eleanor spent the rest of her childhood being raised by her mother’s mother, Mary Livingston Ludlow. She was tutored privately at home until she was 15 when her aunt Anna Roosevelt (a sister of Theodore’s) suggested she enroll at the Allenswood Academy, just outside of London, UK, in the town of Wimbledon. She arrived there shy and unsure of herself, having been starved for affection and criticized for her appearance as a child. However, the headmistress took a special interest in her, and young Eleanor blossomed, becoming fluent in French and very social.

When Eleanor’s first cousin, Corrine Douglas Robinson, came to the school, with her first semester overlapping Eleanor’s last, she declared that Eleanor was “everything” at the school, well known and beloved by everyone there. Eleanor had found her confidence.

When she was 17, she was recalled to NYC by her grandmother to make her social debut. She was given a public “coming out” party at the Waldorf Astoria in NYC, which she later said was miserable for her because she had been so long abroad, she had lost touch with her American friends and didn’t know anyone at her own party.

The summer after her coming out party, she encountered her fifth cousin one time removed, Franklin Delano Roosevelt, on a train in NYC. They immediately felt something for each other and began corresponding in secret. They became engaged the next year, in 1903. Franklin’s mother, Sara Ann Delano, was against the pairing and made Franklin promise to wait a year to announce the engagement. She even took him on a Caribbean cruise, hoping a separation from Eleanor would squash any romantic feelings he had for her. It didn’t work, and Franklin wrote his mother saying he knew he had disappointed her, but he knew what he felt for Eleanor, had felt it for some time, and did not imagine he would be persuaded to feel differently.

Their wedding was arranged to accommodate Theodore Roosevelt’s schedule as US President, because he had agreed to give Eleanor away, her being his late brother’s daughter. When he was scheduled to be in NYC anyway, she and Franklin got married on March 17, 1905. Theodore’s presence at the wedding was front page news across the country.

Franklin and Eleanor took a short honeymoon at Franklin’s childhood home at Hyde Park, NY, then got an apartment together in NYC. That summer, they took a longer honeymoon in the form of a three-month tour of Europe.

Eleanor had a contentious relationship with her mother-in-law from the beginning. In fact, Sara was the very definition of “mother-in-law from hell” for Eleanor. She and Franklin had two residences, both obtained for them by Sara, and in both of which Sara had rooms where she lived, adjoining the married couple. Sara ran both households with an iron fist and even tried to take over the raising of the six children Eleanor and Franklin had together. Sara once told one of Eleanor’s sons that she was more mother to him than Eleanor, because Eleanor had only borne him, but Sara had raised him.

After about a decade of this, Eleanor had a mini-breakdown, complaining to Franklin that she was forced to live in homes that were not really hers, and in a manner not of her own choosing. Still, little changed. Franklin was the definition of “mama’s boy,” being his mother’s only child (but not the only child of his late father), and he let his mother have her way.

Eleanor confessed to her only daughter that she disliked sex, and raising children did not come naturally to her; she viewed both as a duty to be borne in marriage. Franklin knew this and carried on an affair with his secretary. When Eleanor discovered love letters between them, she also discovered Franklin was considering leaving her for his secretary. However, Sara stepped in for Eleanor for a change, threatening to disinherit Franklin if he divorced his wife. Eleanor and Franklin stayed together, but their relationship became more of a political partnership at that point, and Eleanor threw herself into public work, such as charity and civic groups.

When Franklin became ill with polio, which paralyzed his legs, it was Eleanor’s care that saved his life, according to his doctors. It was also Eleanor who encouraged him to keep up with his political career when Sara was encouraging him to retire and become a country gentleman. Things finally came to a head between Sara and Eleanor, and Eleanor was permitted to have her own residence at Hyde Park, a cottage where she could stay and have friends over, and live her life as she chose, without Sara’s influence or orders.

By the time Franklin became President, Eleanor was already highly active in charity and social causes and was depressed at the idea of becoming First Lady, a role that had previously been defined by domesticity and femininity. Eleanor set out to re-define the role and became the 1st First Lady to speak at a national political convention, to make regular media appearances, to have her own radio show, and to write her own weekly magazine column, all while being First Lady. 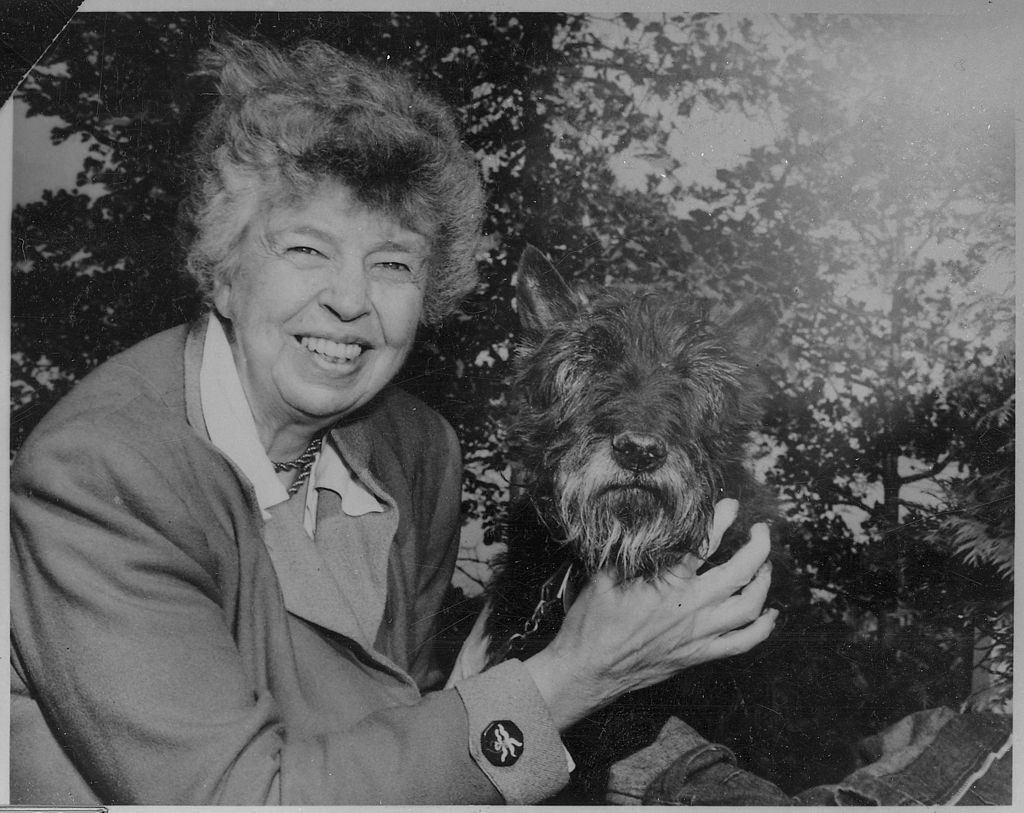 Roosevelt with her dog Fala in 1951 (Wikipedia)

When Franklin died shortly after his record-breaking fourth election to the White House, Eleanor was not with him, but her daughter and Franklin’s mistress were. This was upsetting to Eleanor on several levels; she had wanted to accompany him on the trip to Georgia where he died, but he took their daughter instead, and her daughter knew about his ongoing affair with his secretary, who was the same one Eleanor had found the love letters to decades before. Her daughter’s revelation that almost everyone around Franklin knew about the affair for decades and kept it from Eleanor caused her and her daughter to be estranged for a while, though they eventually reconciled.

Eleanor returned to Hyde Park and readied it to be handed over to the federal government as a museum, as Franklin wished. After, she purchased and rented several different residences in NYC. She continued to be active politically (as an appointee to the General Assembly of the United Nations by President Harry Truman), and in other civic causes. After being hit by a car in NYC in 1960, she was diagnosed with aplastic anemia and then developed tuberculosis in 1962, after being given steroids for her injuries from the accident. She died in NYC on November 7, 1962, tended to by her daughter. She was buried at Hyde Park, next to Franklin. President John F. Kennedy ordered all US flags around the world to be lowered to half-staff in her honor. 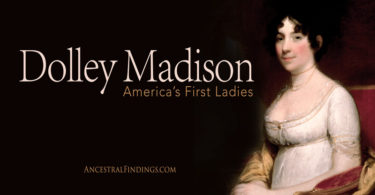 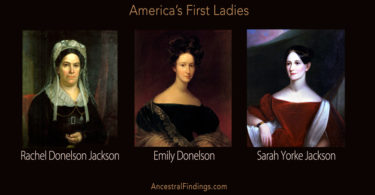