The 1870 US federal census is a valuable tool for genealogists looking for their families in America just after the Civil War. It is a census of a few important firsts, as well as one of a controversy that still gets brought up among social scientists to this day. Here is everything you need to know about the 1870 US federal census.

The 1870 US federal census was the first one conducted after the Civil War and was taken from June 1, 1870, to August 23, 1870. It has a lot of firsts associated with it in terms of previous US censuses, as well as some controversies surrounding it. It is the first US federal census to count African-American populations in any kind of detail; previous censuses had only recorded those who were free, while the whole African-American population was free in the 1870 census. It is also the first census where all of the hundred largest cities in the United States reported populations of more than ten thousand, and it was the last US federal census that was conducted by US Marshals as enumerators. Later censuses used private citizens as enumerators, who applied for the job.

The population of the United States showed a twenty-two percent increase from the 1860 US federal census. Yet, the total population count of nearly thirty-nine million people was controversial, because many citizens and census professionals believed it underestimated the true populations of larger places, such as the states of New York and Pennsylvania.

With the 1870 US federal census, assistant US Marshals were hired and supervised by US Federal Marshals to enumerate the census. The marshals had to return the census questionnaires to the Census Office in September of 1870, and the penalties for refusing to answer questions asked by an enumerator were extended to all of the questions on the census, not just the primary ones. Also, the previous slave questionnaires were re-designed to be used to accurately reflect the newly free African-American population in the United States.

The 1870 US federal census is one of the few to have a mortality schedule attached to it, reflecting US citizens and residents who had crossed over during the prior year. The 1870 mortality schedule showed a 0.03 % decrease in national mortality from 1860 and a 0.11 percent decrease from the 1850 US federal census. These lower mortality rates indicate a higher standard of living in the United States over the previous two decades. This can at least partially be attributed to the Industrial Revolution, and an improvement in medical knowledge, as well as an improvement in the type and quality of modern technology.

Wealth in the United States also increased from the 1860 census, going up by 17.3 percent, to a total national wealth of just over $14 billion. New York, Pennsylvania, Massachusetts, and Ohio were the biggest state contributors to this increase in national wealth. The bulk of the newly generated wealth was in the northeastern American states, as well as in some of the newer states like Wyoming, which were building their economies thanks to the Gold Rush and increased settlement by eastern pioneers.

In the matter of firsts, the 1870 US federal census was the first one to ask the state or country of origin of respondents. This was done to get a more accurate picture of the states that had more native-born Americans and which ones had more immigrants. Not surprisingly, New York City had the largest number of foreign-born residents, who made up forty-four percent of the city’s population. Other cities with large populations of foreign-born residents in this census included Chicago, Philadelphia, San Francisco, and St. Louis. This showed a large ethnic and cultural change in the United States overall between 1860 and 1870, largely as a result of more immigrants coming to the nation after the Civil War ended, and in more eastern people moving west, and an increase of people moving across state borders in general as they tried to find their places in the newly re-unified nation.

This census also asked if any male citizens age 21 and over were ineligible to vote in federal elections for any reason other than rebellion in the Civil War or any other crime. This usually meant that someone could not vote because they were illiterate or could not pay a poll tax if one was required in their state (both things that were later declared unconstitutional).

The controversy of under-counting the population in New York and Pennsylvania for this census was so outspoken, in spite of the assertion by Francis Walker (Superintendent of the 1870 US federal census) that the counting was done accurately and in a clear and standardized way, the President made the unprecedented order to do a re-count in those two states. The growth rate in New York and Pennsylvania was not as large on the census results as citizens expected, which resulted in the claims of under-counting, with the general belief being that many people were missed on the count because they would not answer their doors because of unseasonably cold weather.

The allegations of undercounting on the 1870 census were brought up again after the count of the 1890 census was taken. With the 1890 census, the national population growth was shown to be much lower between 1880 and 1890 than it was between 1870 and 1880. Citizens alleged that the 1870 census must have under-counted by around 1.2 million people to account for this discrepancy. This issue has been studied for decades by census researchers, and no exact reason for the discrepancy has been discovered. In fact, modern social scientists believe that the 1870 census was not nearly as severely undercounted as the 1890 investigators believed it to be. Instead, modern social scientists believe the non-response rate on the 1870 US federal census was about the same as it was in both previous and subsequent US federal censuses. 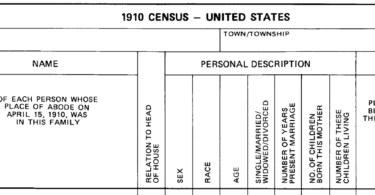