One source of birth records that you might not have considered is the family Bible. These were popular in the 1700s and 1800s and were Bibles with blank pages for recording birth, death, and marriage information in a family. They were usually handed down from generation to generation. This is what you need to know about family Bibles.

An important source of birth records that you might not think about are family Bibles. These were extremely popular in the 1700s and 1800s, in both Europe and the United States. These were typically large Bibles that had interior pages on which you could record births, deaths, and marriages in your family over the generations. The larger than average size of the Bibles made them sturdy and durable, which was perfect for handing them down from generation to generation, as was often done. You will often find three or more generations recorded in a family Bible, often in different handwriting, as different people in different generations took over the job of recording events in it.

When family Bibles were in vogue, they were sold in stores, by catalog, and even by door-to-door salesmen. Their primary attraction were the blank pages for recording family information. These pages were usually located between the Old and New Testaments but could be found at the front or back of the Bible, depending on the publisher. In addition to recording vital statistic information on a family, the people who kept family Bibles sometimes pasted newspaper clippings, photographs, and other two-dimensional memorabilia into them.

You will find a treasure trove of information in most family Bibles. The full names of individuals were usually used, and you will be able to discover a woman’s maiden name in the marriage records (for women who married into the family keeping the Bible). Full dates of events (month, day, and year) are included in the recordings, which is incredibly useful if you’ve only been able to find a partial date, a guess at a date, or no date at all. If any extra information is recorded, that is just icing on the genealogical cake.

The family Bibles were usually handed down to the oldest (or only) girl in a family, as women were considered the record keepers of family information in generations from the 1700s and 1800s. If there were no daughters, the Bible may have been left to the eldest granddaughter of a son, or to the eldest son. Sometimes, the family Bible was left to whoever was the most interested in having it and keeping information in it.

If you have a family Bible, you’re lucky, as the information is already there, at your fingertips. If you are looking for a family Bible for another branch (or any branch) of your family, there are many that have been digitized and recorded on a variety of genealogy sites online. You can also try tracing a family through the people most likely to have inherited the Bible, and enquire of them if they have it. While not every family kept a family Bible, looking for one is well worth the time and effort for the information it can give you, especially concerning birth dates, and even the names and birth dates of previously unknown children on that branch of your family tree. 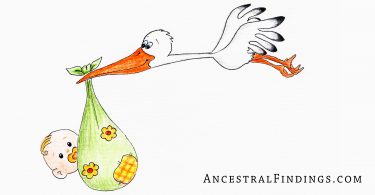