Identifying your family photographs starts with identifying what type they are. The type of photograph can reveal the era in which it was taken. I’ll talk about when you know the era… it can be easier to ID the people.

Identifying your old family photographs is a lot easier if you know the era in which they were taken. Knowing the era gives you a better clue as to who the people in it might be. If you can narrow down the photo’s era and the location where it was taken (even if it’s just a general location), you can usually ID the people in the photos with a high degree of certainty, depending on how familiar you are with the people on your family tree.

Here is a basic tutorial of the early photograph types, when they were used, and how to identify them.

The earliest type of photography, this was first invented in Paris, and swiftly made its way to most areas of the western world. Daguerreotypes are easily recognized, thanks to some distinctive identifying features:

Ambrotypes were a slight improvement on the daguerreotype, which had a tendency to tarnish, due to its silver coating and copper plating. Ambrotypes fixed this issue by printing the photograph on a sheet of glass. Early ambrotypes have the photograph on the back of a piece of glass, with another piece of glass behind the photo. Later versions of the ambrotype had the photo printed on the front of the glass, with a black paper coating on the back to make the negative image appear positive. Ambrotypes are also always in a case of some kind, like the daguerreotype.

The tintype is a photographic image printed on an iron plate. Early versions were packaged in glass-topped cases like daguerreotypes and ambrotypes. However, the cost of photography became much less expensive in the 1860s, and the case often cost more than the photo. So, later tintypes appear either in paper sleeves or simply as loose (though rather hard, due to the iron) photos, like you would put in an album. In fact, these were the first album-suitable types of photographs.

The carte de visite was the first type of photography to use a negative from which to make copies (in this case, a glass negative). While other, earlier photograph types were one of a kind photos, the carte de visite allowed people to buy copies of the photos to share with family and friends. Carte de visite photos are identified by being printed on thin paper that is glued to heavy card stock. The photographs themselves have the classic antique sepia tone to them.

This was an improvement on the carte de visite. It was made the same way, but was larger than the carte de visite. It also used new photographic advancements, so the image quality was clearer and the colors brighter. In addition to sepia, silver and black colors were also common in the cabinet card photos. They also often had beveled or scalloped edges.

After the era of the cabinet card, personal cameras entered the market, making expensive photography studios unnecessary except for formal family portraits. It was now possible to buy a camera inexpensively, and take one’s own photos at home. Many people developed their own photos, though photo developing businesses arose to meet the demand for this service. 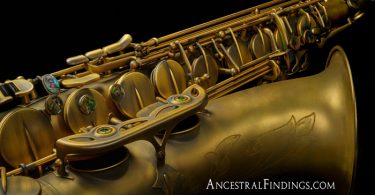