Martha Jane Willick’s grandchildren gather together to go over the list of clues found by previous generations that she left them. There are some amazing historic and genealogical discoveries in that list that would be the envy of any genealogist. However, each clue points to another one. What is the most recent clue, and where will it lead the grandchildren as they take over the hunt for the Lost Treasure of Francis Wainwright?

Martha Jane Willick’s five grandchildren sat around a tall wooden table at their favorite local fusion restaurant; it was the place they usually chose when they all wanted to get together. With its eclectic menu of both all-American burgers and fries, mixed with healthy Mediterranean salads and vegetarian Thai food, there was something there that could please their disparate palates. Since it was busy this time of day, no booths had been available, so they reluctantly agreed to a table near the bar. One that sat so high, you had to climb into the chairs, and even Adam, the tallest of them at 6’ 4”, had his feet barely dangling off the floor.

They’d come here directly from the lawyer’s office, eager to read the list of clues to Francis Wainwright’s treasure found by previous generations that their grandmother left them. Emily and Christine’s parents had graciously agreed to keep their young children for them overnight, so they could work together with their siblings and cousins to make sense of the mystery their grandmother bestowed upon them. Now, about an hour and a half after arriving they pushed their empty plates aside, lightly sipping what remained of their drinks, and waiting for the desserts they’d only ordered so they could keep sitting here without getting dirty looks from the servers.

Christine, the eldest, had the list folded up in her purse, and now took it out, smoothing it flat onto the space the others made on the table, so they could all look at it together,

They read it in silence, each on taking in the information on the single page. Finally, Grace looked up, shaking her head, her part, naturally red curls bouncing. “This reads like a treasure map, only without the map. Each clue the previous generations found points to another one. Do you think Francis Wainwright set it up that way on purpose? Like, maybe there was an original map that showed the location of the treasure, and he set up the clues based on it. If we could find the map, it would make things much easier.”

“It does seem like there had to be a map at some point,” James agreed. “All of these clues found over the centuries are just too logical and organized for there to not have been something explaining how they were planned out. If not a map, maybe Francis had a diary or even wrote down instructions for hiding the clues, assuming he left the task of hiding the treasure to his children.”

“I don’t know,” Emily mused, brushing her long, blond hair back behind her shoulders. “Is it clear if the kids were in on the location of the treasure or not? Look at the list. When did Francis’s descendants actually start looking for this supposed treasure?”

Adam leaned over the table and carefully scrutinized the list.

“The first record of anyone searching for clues seems to have begun with the generation of Francis’s great-grandchildren. They must have heard the story of it from their parents and grandparents. Of course, it doesn’t mean that Francis’s children and grandchildren knew the location of the treasure.”

“Or they did, but were sworn to secrecy for a certain amount of time,” Christine added.

“There are a lot of different possibilities,” James agreed. “Without actually having been there, and with no written documentation of what happened, there’s no way to know.”

“We could assume the previous generations have already looked for a master document explaining all of this,” Grace mused, “but, since there’s nothing on this list about that, it wouldn’t hurt to check the museums, archives, and historical societies in Ipswich, and in Essex County in general. We may be re-tracing our ancestors’ footsteps, but it is worth doing. New discoveries may have been made, new donations were given to these repositories, or we may just find something the previous generations overlooked.”

“I think that’s reasonable,” Christine said. “How about the rest of you?”

They all nodded their assent.

“How about Emily and I take the various historical societies in the county?” Christine continued. “James and Grace can take the archives. Adam, do you mind hitting up the museums?”

“Hey, how come I don’t get a partner?” Adam mock-protested, smiling.

“Because you’re a History major and already brilliant where this kind of thing is concerned,” Emily grinned, nudging him in the ribs with her elbow.

“Let’s also make sure we’re all on the same page about where we know the ancestors have been, how they got there, and where they left off,” James said, pointing to the list.

Their grandmother was thorough in her recording; Grace was sure she had typed it from a handwritten original, adding her own notes and research activities and questions along the way. This list was probably the culmination of a lifetime of genealogical research on one individual person and his direct line of descent. This was good because it meant the list was clear. There was no room for misreading or misunderstanding it. Their grandmother knew what she was doing.

The first clue, discovered by Francis Wainwright’s great-grandchildren, was the pin with the jewel on it. It was left to them by one of Francis’s grandchildren, with instructions to discover where it was purchased. Subsequent generations discovered things like:

So, what was in Philippa’s letter, and where would it point them to go next? Grandma Martha and her siblings and cousins had some ideas, but the five grandchildren sitting at this table would need to read the letter and interpret it for themselves. There was some disagreement in Grandma Martha’s generation about what the letter was surreptitiously telling them to do.

“Where is the letter now?” asked Adam, after they all finished discussing the list, pretending to pick at their desserts that arrived in the middle of their reading it a second time.

“According to this, my mom has it,” Christine said, surprised.

“Then, before we go off searching for a lost master map,” Emily suggested, “let’s pay a visit to Aunt Carol.” 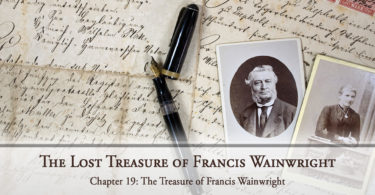