Martha Jane Willick’s grandchildren search for Philippa Sewell’s letter to her husband, Francis Wainwright. The letter is supposedly the most recent clue in the search for the treasure. Where is it? Will they find it? And, when they do, what clue will it provide them?

“I don’t know what you’re talking about,” Carol Willick Nichols said, shaking her head as she sat down on the red velvet sofa. An antique from the 1880s, it was a wedding present from her great-great-grandfather to her great-great-grandmother and was still as soft and plush as when it was new…well, as plush as any furniture from that time can be. “Mother never gave me an old letter to keep. And if he had, I would have read it. I’m interested in history, too, you know.”

“Mom,” Christine insisted, “Grandma’s list clearly says the most recent clue to Francis Wainwright’s treasure is a letter written by his wife, Phillipa, and that you have it. Your name is written on the list as the current owner of the letter. It’s got to be here.”

“Did she ever give you any small antique?” Grace suggested. “Something that maybe could have a letter hidden in it?”

“Well,” Carol said, touching her finger to her bottom lip, deep in thought, “Mother gave me so many old family heirlooms over the years. Richard got his share, too. She wanted us to have an appreciation for family history. Believe me, I did. Maybe not quite so much for Richard, but he’s always been more of a “live in the now, not in the past” kind of person. There are some things in the attic that might be small enough to hold a letter. I’ll bring them down. While I’m doing that, I would suggest you kids look through all the antique furniture Mother sent over here a few years ago. Who knows? The letter might be hidden underneath a drawer or behind the glass in a mirror or something.”

So, Carol went upstairs, and her daughter, son, nieces, and nephew began to rummage through the furniture, taking it apart in some cases, only to put it back together again as carefully as they could. Each one was certain their grandmother’s spirit would come down from heaven and slap them if they so much as chipped a bit of varnish on anything. She treasured those items, and almost certainly still did, even though she wasn’t here to care for them anymore.

“I’ve got nothing,” Adam said after about an hour of intense searching. He shrugged his shoulders. “How about you guys?”

“Nothing here,” Emily chimed in.

“Me, either,” said Christine, sounding disappointed.

“Or me,” James confirmed.

“Well,” Emily sighed, sitting back on her heels in front of the ottoman with the secret compartment beneath the cushiony top, “I hope Aunt Carol has better luck than us.”

“Grandma wouldn’t have said she had the letter if it wasn’t here,” James said, certainty in his voice. “It is here. It’s just a matter of finding it.”

They waited another half hour or so, wondering if they should go up to the attic to help Carol when the sound of creaking wooden boards on the staircase alerted them she was coming back down.

The broad grin on her face said everything. She was practically beaming. Every one of Martha Jane Willick’s grandchildren sat straight up and leaned forward as one, eager to hear what Carol found.

She carried a small wooden jewelry box in front of her. It looked like a miniature footstool, with four tiny legs and a bright, multi-colored bit of floral embroidery with some sort of stuffing underneath attached to the top. Grace guessed it was probably circa the 1870s, or maybe a decade or two older.

Sitting on the sofa once more, she placed the box on the coffee table in front of her, and all the kids gathered around her.

“I think I have what you’re looking for,” she said, enthusiasm in her voice. She was obviously quite happy to be brought into the search. Carefully, she lifted the lid, revealing an empty space inside. Then, she slipped her fingernails into a barely visible space in the back between the bottom of the box and the back side and lifted.

And, in the hidden compartment, a folded letter on linen paper, browned with time, tied with a bit of twine.

“To Francis Wainwright, Ipswich, Massachusetts,” was written in a distinctive 17th-century flowing script, with lowercase “s” letters that looked like lowercase cursive “f’s”.

“That’s got to be it,” Christine breathed, carefully reaching for the ancient parchment. She was surprised by how sturdy it seemed after all these centuries. It spoke volumes for the quality of the paper when it was still made from linen, sheepskin, or hemp. After the Civil War, when most paper was made from wood pulp, it became much more fragile and likely to flake off at the corners and edges after only a few decades. This paper was made with real craftsmanship and made to last.

Gently, so as not to inadvertently damage the precious cargo, Christine untied the centuries-old twine, handed it to Carol for safekeeping, and delicately unfolded the paper, smoothing it out on her lap as she did so. She wanted everyone to be able to get a good look at it.

“Well?” Emily asked, after Christine and Grace, the two who were closest to the letter, had a chance to go over it.

“It’s definitely from Philippa to Francis,” Grace confirmed. “Her signature is at the bottom.”

“I can’t believe I had this all this time and never knew,” Carol said, shaking her head. “Mother gave this to me a decade ago, at least. I wonder why she never told me.”

“Probably because she’d decided by then to let your generation skip the search,” Adam said.

“But, what if I gave this away, or sold it on eBay or something?” Carol was still dumbfounded by the secret her mother kept from her.

“She knew you wouldn’t,” Emily assured her. “Family history means too much to you.”

“I think this is from Philippa to Francis while he was away on business,” Christine said, pouring over the letter more closely. “He traveled quite a bit for a 17th-century man. It seems to be from sometime in the middle years of their marriage when some of their children were grown, some were still young and at home, and one daughter was about to get married. Shall I read it out loud to you?”

To be continued in chapter 6 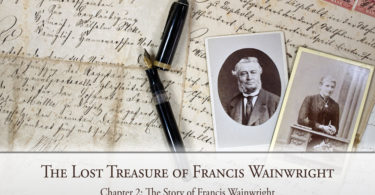 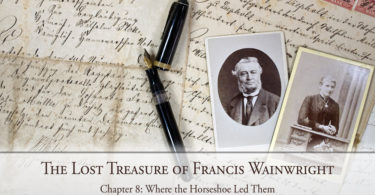