All five Willick grandchildren are searching for a horseshoe commissioned by Francis Wainwright, which he engraved and gave as a gift to his beloved wife, Philippa. They are convinced the engraving on the horseshoe, or the shoe’s location will provide them with their next clue. Will they find it?

Thanks to some genius internet detective work by Grace, the Willick grandchildren didn’t have to go all the way to Ipswich, after all. As it turned out, there was no inventory of Philippa’s estate, as Francis outlived her, and back in the 1600s, a married woman’s estate was part of her husband’s. This meant there was no need to do an inventory on Philippa, as she had no estate of her own; it all belonged to Francis. Only single women and widows who had not remarried had estate inventories.

If a will had ever existed for Francis, it was lost to time, or hidden in some distant relative’s attic. However, there was an inventory of his estate, which included many household items that Philippa probably used, or may have even been brought into the marriage by her as part of her dowry. Among the things listed in Francis’s estate were five horseshoes.

As Grace pointed out to her siblings and cousins, this was strange for two reasons. One, a single horse has four legs, so to have a fifth horseshoe made no sense. Besides that, Grace found it hard to believe, as wealthy as Francis was, that he only had one horse. Adam suggested maybe, in Francis’s old age, he only required one horse for riding on personal errands, rather than a stable full of them for pulling carriages and doing fieldwork. All Willick grandchildren agreed this made sense, and it made it all that more likely that the fifth horseshoe was Phillipa’s horseshoe.

The second reason it was odd, according to Grace, was that horseshoes would not normally be listed in an inventory of estate, because they were presumably on one or more horses. They wouldn’t be mentioned, because they were nailed to the horses and therefore part of them; the horse or horses themselves would be listed in the inventory, and the shoes would be presumed to come along with them.

The inventory list was rather long, as it would be for a wealthy man like Francis, and farther down it, after the discussion about the horseshoes, Grace did find exactly one horse listed as belonging to Francis at the time he died. Based on what they knew and/or deduced about horseshoes in the 1600s, all five Willick grandchildren agreed that four of the horseshoes listed in the inventory were probably new, and not yet assigned to a horse. The fifth had to be Philippa’s.

But, where did it go? The inventory told them it existed in Francis’s household when he died, but it didn’t indicate where it went.

“We need to look for wills and/or inventories of estate for Francis’s sons and the husbands of his daughters,” Emily was quick to add, eager to contribute as much as she could to the search. “Or, the daughters themselves, if they were single or widows who weren’t remarried.”

They gathered at Christine’s house while her husband was at work and her kids were in pre-school and elementary school, each with a laptop, except Christine, who worked on the desktop in the living room. After a couple of hours, they all had their results. Not surprisingly, it was Christine, who looked into the estate of the famous Simon Wainwright, who came up with something useful.

“Simon’s inventory of estate mentions one horseshoe,” she announced to her assembled guests. “That can only be his mother, Philippa’s horseshoe, right? Otherwise, why mention just one horseshoe as part of an estate? Singling it out like that seems to mean it is somehow special.”

“Not that I can find,” Christine said, sadly.

“What next, then?” asked Adam. “Look for the wills and inventories of estate of Simon’s children?”

“That’s exactly what we do,” said the computer-fluent, code-writing Grace.

And, back to work they went.

This time was a little easier, as there were four daughters and one son, which meant five children in total… one for each of them to research.

It was Emily who found the piece of golden information this time. “Mehitable Wainwright had the horseshoe,” she announced, after a period of searching.

Everyone set down their laptops, Christine left her computer, and they all came to gather around Emily.

“Well,” Emily said, enjoying getting to be the one to tell the story for a change, “Mehitable Wainwright was one of four daughters of Simon, and a granddaughter of Francis and Philippa. Mehitable married Richard Saltonstall, and they had one known child together, though it’s possible they had more who died before they got out of childhood, or were unrecorded. Either way, any other children died before her, because they are not mentioned in her will.”

Emily grinned widely as everyone around her gasped.

“She had a will?” marveled Christine. That was like gold to anyone doing family history, especially during the 1700s.

“She sure did,” continued Emily. “Mehitable outlived her husband, and only had one child left when she made her will. She never remarried, so she got to make her own will, as her estate was her own, with no husband to claim it on her behalf. She left many things to her nieces and nephews, but her only living child, Judge Richard Saltonstall, Jr. received the bulk of the estate, and anything she had that was of significant monetary or sentimental value. She actually mentions giving him ‘my grandmother’s engraved horseshoe, to be passed down to whichever of my son’s daughters he sees fit.’ I did some more digging. Judge Richard Saltonstall only had one daughter who outlived him, Mary Cooke Saltonstall Badger, wife of Moses Badger. The horseshoe had to go to her.”

All the Willick grandchildren smiled, including Emily. They were hot on the trail of the potentially valuable clue the horseshoe represented. It was important enough in the Wainwright family to be mentioned in estate inventories and handed down in wills. It had to be the clue for which they were searching.

To be continued in Chapter 8. 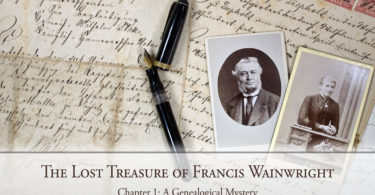 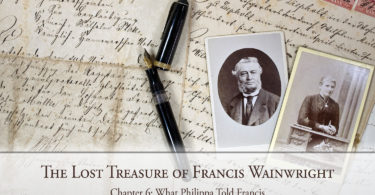