Francis Wainwright’s treasure is apparently kept in his chest. But what is his chest? The Willick grandchildren ponder. Was it his actual chest, or a wooden or metal one? And if it is a chest and not a metaphor for something else, where is it now? The answers to these questions bring the Willick grandchildren closer than ever to finding the long-sought treasure.

“In his chest?” Adam asked, confused. “Like, his actual chest?”

The prospect of grave robbing did not sit well with James, who just muttered, “No. No way. Not doing it. Forget it,” while shaking his head.

“That would have been really hard to accomplish in the 1600s,” Grace pointed out. “Since men’s shirts didn’t typically have front pockets then, someone in the family would have had to put the treasure underneath his clothing in a way other mourners wouldn’t notice. Or, they would have had to open him up, put it inside him, and sew him back up, all of which would have been incredibly illegal to the Puritans. They could have executed anyone in the family who participated in desecrating a corpse. Too risky, which makes it highly unlikely. We’re probably talking more about a metaphor here.”

“Besides,” Emily said, “if it were as easy as digging up Francis’s body, surely someone in the know would have done it in the generation of his children or grandchildren. Physicians sometimes raided graveyards for bodies to experiment on back then, so it wouldn’t have been too hard for them to get away with it. New Englanders were a superstitious bunch until around the American Revolution. Just look at the Salem witch trials. Even if we could get permission from the city of Ipswich to dig there, which is highly unlikely, even with all this evidence and generations’ worth of work, it’s entirely probable we would find the treasure has already been found and removed centuries ago. Depending on how into family history and relics the treasure seekers were, Francis himself might not even be there anymore.”

“Ew, gross,” Christine said, grimacing. “Don’t say that, Emily. It’s just creepy. Okay, let’s assume the treasure is not, in fact, in Francis’s literal chest. If it’s something he truly wanted to protect, having it buried with him wasn’t exactly the most secure way of hiding it for the times, and he probably knew it. Besides, he would have wanted the family to re-discover it someday, so it needed to be hidden somewhere the family would look for it, and where it wouldn’t be vulnerable to grave robbers. Grace is right. The chest is a metaphor or a reference to a chest where you keep important things. They had those back then. Where do you think ancient pirates put their treasures?”

Christine laughed, along with her brother and cousins, the image of pirates going “Arrgh” filling their minds.

“Well,” James said, eventually. “Where would the family be most likely to look?”

“Francis wouldn’t have been able to know what his family would look like beyond his children and the grandchildren who were already born at the time he died,” Grace suggested, thinking, her chin resting on her hand. “And, Philippa died before him by a good few decades. The treasure was something that was important to her, and to their relationship with each other. I think the horseshoe makes that clear. He would want to keep the treasure close, and not risk it falling out of the hands of his family.”

Christine pondered this for a moment. “That makes his land, or the lands of his children the most likely candidates, but those have been thoroughly searched over the years. Maybe they missed it, but even so, how could Francis be sure that land would always be in the hands of his descendants?”

“Oh, I know this one,” Emily said, her hand shooting up in the air like she was answering a question in school. “Back in the days of early English settlement in America, so basically the 1600s, most people purchased land with the express intent of handing it down through the generations of their family. Unless they sold it themselves, they usually intended it to always be in their family, as a legacy, and part of the benefit of being among the first of the English to come to North America. I even read a story once…a true one, mind you…of a house built in the 1600s right here in Massachusetts that stayed in the same family that built it for eight generations. Right there on the wall of the house was the will of the original builder, cursing any generation who sold the house. It was finally sold about twenty or thirty years ago because the newest generation didn’t believe the superstition and didn’t feel the sentimental attachment to the house the other ones did. Francis may very well have believed with utter conviction that his family would always have his land.”

“And his kids all had land given to them out of Francis’s original parcel,” Adam remembered.

“That means it was all basically Francis’s land,” James exclaimed. “So it has to be on land he or his kids owned, right?”

“But in a protected place,” Christine mused. “One that would be the most likely to stand the test of time, where the elements wouldn’t touch it. If it was important to Philippa, he would want it to be kept pristine. Not just for future generations, but for her, for the memory of her. He obviously adored her.”

“I think they were soul mates,” the romantic Emily said, a dreamy look on her face.

“Possible,” Grace agreed. “Even though Francis remarried after she died, the fact he saved something so important to Philippa indicates she was his true love. I’m inclined to agree with it being on family property, but as Christine pointed out, it’s already been combed over by a dozen generations before us, and more than once by most of them. What could we find that they didn’t?”

Grace, always the analytical one, already knew the answer. “We need schematics of his house. If the treasure was that important to him and, more importantly, to Philippa, he wouldn’t have put it outside. Even the most waterproof container available in the 1600s would be vulnerable to the elements, even underground or in a tree. He wouldn’t have left it with one of his children, either. He would want it in his own house, and it would pass down to whatever child inherited that house.”

“Not necessarily,” Grace said, shaking her head. “It could be in the cellar, in or under the foundation of the house, or in a hidden part of the house that might have survived to be used in newer construction or kept as a relic by a descendant or a museum. And the remnants of the cellar and foundation are still there. We need either plans for the house; a drawing of it, along with the interior; or a contemporary description of it. That may lead us to the treasure… or at least our next clue.”

To be continued in Chapter 10. 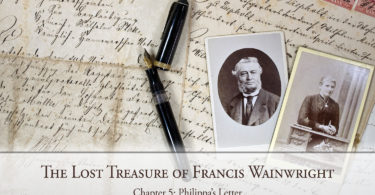