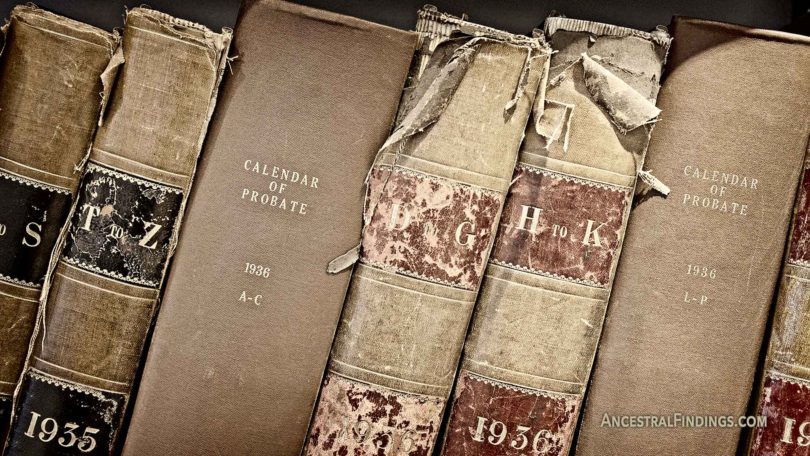 Occasionally, you will not find a will or an estate inventory for your ancestor. This does not mean that no probate records exist at all. A probate record is any record that has something to do with settling the estate of a deceased ancestor. You may find evidence of such alternate types of probate records in old newspaper records, or you may find these alternate records online or at the courthouse in the county where your ancestor crossed to the other side. Just because a record in a probate file seems scant, don’t ignore it. Even the briefest of probate records often has valuable genealogical insight to share with you. It is your job as a genealogist to pay attention to it, interpret it as accurately as you can, and accurately record it for posterity.

Alternate Types of Probate Records You May Find

In some states, certain relatives or descendants of a person are automatically entitled to a percentage of that person’s estate, whether they are mentioned in the will or not. If these people cannot be easily found by the executor of the estate or by the court, you may find notices posted in local newspapers looking for them. These people are usually children or grandchildren, but can sometimes be spouses who disappeared (if the marriage was never legally dissolved after a disappearance).

These newspaper notices were required by law to be published, usually once a week for a certain number of weeks (typically two to three) without them responding to the court before those heirs could legally be eliminated as beneficiaries of the estate. If you find old newspaper notices like this or find copies of such notices in a probate file, it may give you new relationships for your ancestor that you did not know before, or give you a good picture of the state of the relationship your ancestor had with missing potential heirs or beneficiaries. Be sure to record the information for future generations to use and study.

You might also find handwritten wills that were never filed with the court until after the person who wrote it crossed to the other side. These were wills that close family members or friends admitted to the court to assist in settling the estate, so the person would not be considered intestate and their wishes could be carried out properly. The court would take a handwritten will with no prior filing and determine if it was legal or not before allowing the settling of the estate to go ahead as described in the document.

Any potential heirs not mentioned in the will would be taken into consideration according to what local law said was required, as well as according to what the deceased person wished, meaning their personal relationship would be examined. Once everything was reported to the court’s satisfaction on these matters, then the estate could be distributed according to the terms of the heretofore unknown will.

What if There are No Court Records on an Estate’s Probate?

Occasionally, you won’t be able to locate any kind of court records regarding the probate of the estate of an ancestor. This is perfectly normal. While most people in the history of the United States left some kind of record of their estate (unless they were children, and even then there are exceptions), their crossing to the other side may have left other evidence besides the standard death certificate, obituary, and headstone. These are the alternative probate records. They aren’t technically probate records, per se, but they are good substitutes for them in the absence of the official probate records themselves.

If someone’s estate was substantial (or even just sentimental, to those who could afford to be that way) and there was no will, there might be a court fight amongst the potential heirs as to who would control the estate, and who would inherit what. This was especially true if the deceased person left no direct heirs, such as children. This would leave nieces, nephews, siblings, and cousins to fight it out over the estate, and sometimes even long-time treasured companions of no relation to the deceased would join in the fight for control of the estate. If the deceased outlived all of their children but left grandchildren, they might fight amongst themselves for the estate, too, as would step-relatives from second, third, and subsequent marriages.

You can sometimes find records of these court fights in the actual records of the county court where your ancestor lived at the time of their crossing. The records might even be at the state court, or state supreme court level, if it was an important and substantial enough estate. You will also sometimes find records of these court fights in old local and state newspapers, which will usually provide more salacious and personal details of the fights between the potential heirs than the court records alone will. It is well worth it to seek out such potential records if traditional probate records cannot be located.

Another place to look is in property records. If your deceased ancestor owned land or a house or both, that real property had to go somewhere after they crossed over to the other side. You can check local property records for around the date of your ancestor’s crossing, or even a few months to a few years after (depending on how long it took for the estate to be settled) to learn if the property went to a relative (and which relative), or if it was sold out of the family. These are all excellent things to know, that probate records can teach to you.