Are you curious as to the difference between wills and probate records in your genealogy research? Here’s the things you need to know.

When you are doing genealogy, you will most likely eventually go into court records and look for the wills of your ancestors. Wills can have a huge amount of previously unknown genealogical information in them. You can confirm relationships with them, learn new relationships, and get an idea of the lifestyle of your ancestor by looking at the money they’re giving away and the belongings they are assigning to various relatives. People have been making wills for centuries, so it’s not a new thing. You will even find wills dating from the early middle ages, and sometimes even earlier. The will of Cecily Neville in 1495 in England, for example, includes one of the earliest mentions of her then four-year-old great-grandson, the future King Henry VIII.

Since wills have been around for so long, the chances of you finding one for your ancestor is good. Not everyone made a will, though. If someone died without a will, they were considered to be “intestate.” If they had heirs and anything of value, an inventory of their estate may have been taken instead of a will, and an executor of their estate appointed by the court. The inventory, declaration of executor, and all financial information concerned with the solvency or lack thereof of the estate are together known as the probate documents.

While there is not always a will in the probate documents, this does not mean there isn’t a lot of good information on your ancestors in those documents. As an example, one ancestor of mine did not have a will, but the probate documents of his estate named a court-appointed executor. The name of the executor proved an important family relationship, as this ancestor had four confirmed sons, but there was a fifth male in the family who was always listed as the son of this ancestor’s brother in census records, but as the ancestor’s son in personal family records. The mystery fifth son’s appointment as executor of the estate in probate documents proved the personal family records were right and the census records were not.

If you have always wondered if there are any family photos for a branch of your family, you may discover this in probate records, if photographs are included in the estate’s inventory list. Then, you will have an avenue to explore for finding them by researching the line of the various children of the family who may have gotten them after the court was done probating the estate.

You can tell if your ancestor was well-off or not from the monetary pages of probate documents. You will also see a list of people to whom they owe money and who owe money to them. These people can offer clues as to other potential family relationships.

Without a will, the court has to decide on the disposition of someone’s estate, under the guidance of the executor. It can take months, or sometimes years, to probate an estate, depending on how extensive it was. The longer it took for the estate to go through probate, the more papers will be in the file, and the more information you will find on the life of your ancestor and how he or she lived it. 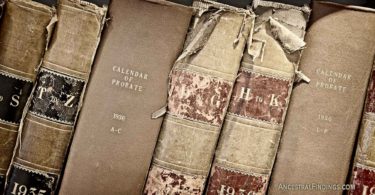