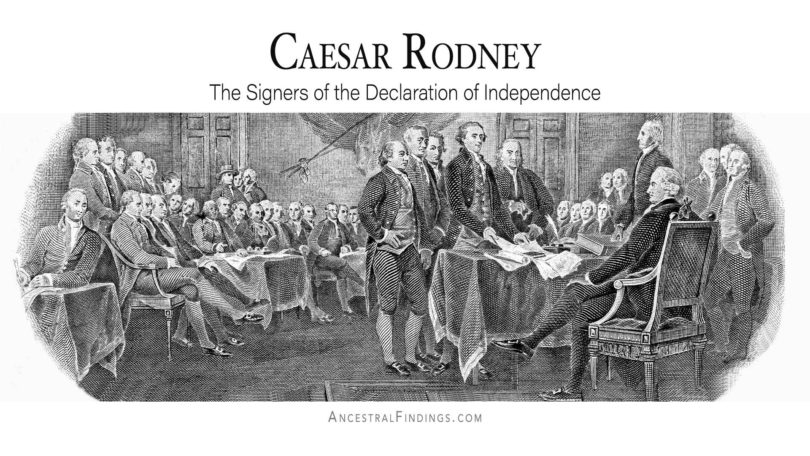 Caesar Rodney was a signer of the Declaration of Independence, and one of Delaware’s most prominent and important founding citizens. While he never married or had children, he left a legacy of leadership, freedom, and integrity that is still remembered in Delaware today. Caesar set out to be the best citizen of Delaware he could be. In this quest, he most decisively succeeded.

Caesar Rodney was born in October of 1728 in East Dover Hundred, Kent County, Delaware, on his family’s farm called Byfield, located on St. Jones Neck in that township. Caesar was the eldest of eight children born to his parents, Caesar Rodney and Elizabeth Crawford. With their eight hundred acre farm, Byfield, the Rodney family was among the landed gentry of their time. They had other adjacent properties to their farm, as well, and eventually grew their farm to one thousand acres. The sale of the wheat and barley grown on the farm to Philadelphia and the West Indies provided enough income for the Rodney family to mostly live lives of leisure, which allowed them to participate in both the social and political life of Kent County.

Caesar’s dad died when Caesar was only seventeen years old, leaving him to take care of the farm, as well as his mom and his younger siblings. As a result, Caesar was the only one of the Rodney siblings who received any kind of formal education. When he was thirteen or fourteen years old, he attended The Latin School, which was part of the Academy, and the College of Philadelphia, which is now known as the University of Pennsylvania. As Caesar was still underage when his dad died, his guardianship was given to Nicholas Ridgeley by the Delaware Orphan’s Court.

Caesar suffered from poor health for most of his life. As a child, he is known to have been plagued by childhood asthma, and he still had occasional episodes of it after growing up. Most famously (and portrayed in the 1972 movie version of the Broadway show, 1776), Caesar had a sort of facial cancer for most of his adult life. It was on the exterior, and visible unless he wore a green scarf over it, which he usually did. He went through numerous expensive and painful treatments to try to get rid of it. It is thought that this is when he eventually died, at the age of fifty-six, though this is not known for sure. If it was the cause, then he died approximately eight years after it became noticeable to the outside world.

Caesar never married or had children, though he is known to have attempted to court several ladies who were prominent in Delaware society, and expressed his love and admiration for them. When his attempted courtships did not go anywhere, he put all of his energy into being the best citizen of Delaware that he could be.

Among the population of Delaware who he wasn’t trying to court, Caesar was well-liked and quite popular. His brother Thomas described him as being of “great fund of wit and humor of the pleasing kind, so that his conversation was always bright and strong and conducted by wisdom.” Because of this popularity and winning personality, Caesar easily moved into the political spheres that his dad and guardian had also occupied.” Accordingly, Caesar was elected or appointed to a number of positions, starting at age twenty-seven, such as Sheriff of Kent County, Register of Wills, Recorder of Deeds, Clerk of the Orphan’s Court, Justice of the Peace, and a judge in the lower courts of the colony. He was commissioned as a captain in the Dover Hundred Company in Colonel John Vining’s regiment of the Delaware militia during the French and Indian War. After the war, he served as an Associate Justice of the Supreme Court of the Lower Counties.

Caesar aligned himself with the pro-independence Country Party in Delaware, and was selected to be a delegate, along with a fellow future Signer, Thomas McKean, to the Stamp Act Congress in 1765, and was a leader on the Delaware Committee of Correspondence. Duly, he was elected to the Assembly of Delaware, served as speaker of it several times, and was present there on the day the Assembly voted to make Delaware independent of Great Britain and the King.

Caesar also served as a delegate to the Continental Congress from Delaware, joining Thomas McKean and George Read there. He served from 1774 to 1776. While there, he found himself absent when McKean’s pro-independence vote and Read’s vote against it put Delaware at a deadlock and in danger of having to abstain in the voting to adopt the Declaration of Independence when adopting it required a unanimous vote. Being committed to the cause, once McKean sent him word, he rode seventy miles on horseback overnight in the rain to Philadelphia to give his deciding pro-independence vote, which allowed Delaware’s vote to be counted as in favor of adopting the Declaration.

Caesar briefly served in the Continental Army before being sent home to Delaware by George Washington to serve as its wartime governor and commander-in-chief of the colony’s militia. In 1781, he resigned due to his poor health, just after the Battle of Yorktown in the American Revolution. After this, Caesar was elected by the Delaware General Assembly to the United States Congress under the Articles of Confederation, but he was not able to attend it because of his health issues. In 1783, Caesar was elected to that term’s session of the Delaware Legislative Council, which elected him as their speaker.

Caesar’s health had declined to such a point, that for a time, the Legislative Council met at his house to accommodate him. Even without having to leave home to attend to his duties as a speaker, Caesar died before that session of the Legislative Council ended. He was buried on his family’s farm in an unmarked grave. The marker for him that today exists at the Christ Episcopal Church in Dover, Delaware is just a monument to him, since the exact location of his burial spot is not known.

Caesar is today remembered as one of Delaware’s most important founding citizens. A large square in Wilmington, called Rodney Square, is named after him, as are numerous local buildings, schools, and other monuments. A picture of Caesar on horseback on his famous “midnight ride” to the Constitutional Convention to give his vote in favor of the Declaration of Independence even graced Delaware’s state quarter in 1999, the first coin in a series of quarters to depict famous people, events, and landmarks from all the states. 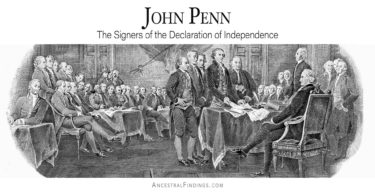 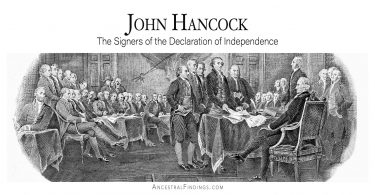