DNA testing is a very popular way of doing genealogy these days. It can open doors and solve mysteries that no records exist to solve. DNA does not lie, either. It always tells you the truth about who you are and who your family is. There are three main types of DNA testing that are done in modern genealogical research. Here’s what each type is and what it can tell you. You can use this information to decide which type of DNA testing is best for your own particular research purposes and goals. This way, you will always be sure to get the information you need to crack those genealogical mysteries.

This is paternal line DNA. It is only passed down from father to son, so females cannot take this test. The do not have Y-DNA. If you have questions about your paternal ancestry, such as whether someone was actually someone’s father, or the result of a non-paternity event, you will get good results using Y-DNA. Y-DNA will also help you crack through brick walls if you are studying a particular surname. If you get to a point where you have no more records to search, you can do a Y-DNA test and see how closely you match up with other people of the same surname in the database of the testing company you use. Get in touch with your close matches, and together, you may be able to piece together your missing ancestry.

This is maternal line DNA. It is passed from mothers to daughters and sons. However, son’s cannot pass it on to their children. Daughters, however, pass it on to their own daughters and sons. This type of DNA is traditionally used to solve ancestry mysteries that go far back in time. If you can find a female line descendant or relative of someone in the modern-day, you can usually determine the identity of even an ancient skeleton, whether it is a male or female.

For example, mtDNA testing was used to determine the identity of the bones of King Richard III of England in 2012. Richard would have inherited his mother’s mtDNA, along with his other brothers and his sisters. By following his sisters’ lines down through their daughters and their other direct-line female descendants to the modern day, scientists were able to get DNA samples of these living relatives to compare to Richard’s skeleton.

This type of DNA remains relatively unchanged throughout the centuries, so the modern female relatives (and their sons) would have the same mtDNA as Richard’s mother and Richard. When the mtDNA of the modern relatives proved a match with the skeleton, scientists knew they had identified the medieval king.

Autosomal DNA was once considered “junk” DNA, with no purpose. However, scientists have now discovered that it can be used to identify both male and female-line relatives for any person. For this reason, it is becoming the most popular type of DNA testing, as anyone can use it to identify any possible relative of any gender. Contacting autosomal DNA matches on the databases of the companies that offer this testing and comparing notes can help you determine which line or lines you connect on and who your common ancestor is, which can unlock many genealogical mysteries and reveal previously unknown information. 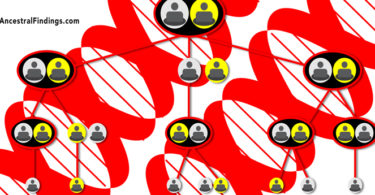