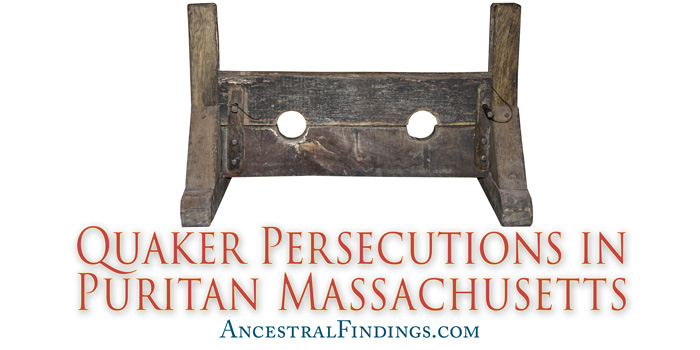 Colonial Massachusetts is well known for the Salem witch trials. However, there was another dark period of persecution before that, which involved the Quakers.

The Puritans came to the American colonies to worship as they chose, as they believed the official Anglican church of England was corrupt. However, they did not extend religious freedom to anyone else. Their goal was to build a solely Puritan community, and no other faiths were welcome. Any outside influences could easily corrupt their brand new and still fragile community. That is when the Quaker movement began in England, newly arriving Puritans brought news to the colonies, and the leaders became vigilant. Ships were searched for Quakers and Quaker religious texts. Anyone found to be a Quaker or suspected of being one was either kept on the ship until it went back to England or kept in jail until another ship could be found to take them back from whence they came.

This worked for a while, but the Quakers were determined to bring their message to the colonies. They became more secretive about who and what they were when their ships docked, and many made their way into the main Puritan communities of Salem, Ipswich, and Boston. Some were invited there by people who heard of them through letters from family back home, while others came of their own desire to evangelize. Soon, secret meetings of Quakers were being held in Puritan homes, and people were being converted.

This did not sit well with the Puritan authorities. It wasn’t just random people who were being converted. Even well-respected, established members of the Puritan church were becoming Quakers.  It took a special conversion experience to be admitted to the Puritan church, and though all citizens were required to attend church services, not everyone was a member. When people began missing church, the Puritan authorities took action to stop the heresy before it could affect more members of their tender and carefully constructed community.

Laws were passed against harboring Quakers in one’s home. Those who violated this, or who were found to be attending secret Quaker religious services, were subjected to some harsh punishments. There were fines, imprisonment, and whipping for first offenses. Younger people were often set into the stocks for first offenses as an alternative. Second offenses meant a hole being bored into the tongue for women and an ear being cut off for men. A third offense meant hanging. Only four Quakers (three men and one woman) were hanged during this period of Quaker persecution, but it left its mark on the community. A statue of the woman who was hanged, Mary Dyer, sits in Boston Square today as a reminder of the religious intolerance of our earliest European settlers and of Dyer’s bravery in pursuing her convictions in spite of the dangers she faced for it.

The Quaker persecution didn’t last long. It started in 1658 and was pretty much done by 1665. However, at that time, a lot of atrocities were committed against Quaker missionaries and local Quaker converts. In one memorable incident, two Quaker convert teenagers, a brother, and sister, were ordered to be sold as slaves in Barbados when their parents were banished from Salem and they could not pay their fines for not attending church. Fortunately, no ship captain was willing to take the teens, and they were set free to try to run their parents’ farm as best they could (while their parents died of exposure within three days of each other after being banished when winter was approaching).

By 1665, it was clear to Puritan authorities that the tide of the Quaker religion could not be stopped from washing against their shores. Though many Quakers had left Massachusetts for the relative safety of the more liberal Rhode Island, a lot of them eventually made their way back to reclaim their homes and land, and to try to speak reason to their Puritan neighbors. A small contingent of Quakers even went to England to seek relief from the king, who ordered an end to the persecutions. Those Quakers returned with a royal edict that the Puritan leaders could not ignore.

By the time the Salem witch trials came along in 1692, Quakers had meeting houses in Massachusetts and New Hampshire and were allowed to openly worship as they chose without persecution from the Puritans. In fact, many Quakers who were there when the persecutions took place saw their community go into a frenzy once again during the witch trials… something that was also perpetuated by the Puritan leadership. While the Quaker persecutions were only a small part of the history of colonial America, they made their mark. They were the first true test of religious freedom on these shores, and in the end, religious freedom, and the Quakers won.