Are you a beginning genealogist? Don’t make the same mistakes at the start that I did. Here’s advice to help you make your research solid from the start.

Hindsight is 20/20 in most things in life, and genealogy research is no exception. I’ve been doing genealogy research for 25 years and have reached the level of knowledge where I now consider myself a good genealogist (though make no mistake, even good genealogists still have things to learn, and we discover new things in genealogy all the time). I’m happy of the research I’ve done and continue to do, for myself and others. Yet, there are so many things from my early work I could have done differently if I’d known better then… things which would make my genealogy research even richer, detailed, and rewarding today. My family tree would be more solid and more like the historical narrative I now aim for it to be.

We all make mistakes when we’re beginning with something before we’ve truly learned the craft. It’s true for anything you learn. However, if I can help some beginning genealogists avoid some of the early mistakes I made when I was learning the basics of this wonderful hobby, I am happy to do so. Here are some things I would have done differently when I began with genealogy if I’d known better. Maybe, by learning from my mistakes, you can get a better start on your family tree and turn it into something wonderful much sooner than I did.

I Would Have Started Earlier

I always had an interest in family history, even when I was too young to understand what it was. I was fascinated by the history of my Moneymaker surname and wondered who the first people were who bore it, I loved looking at old family photos and asking questions about the people in them, and I asked older relatives to tell me stories about their childhoods. But, this was a childhood curiosity of my own, and I had no idea I should be writing down the things that were told to me or asking more detailed genealogy-directed questions.

One of my great regrets is that I didn’t start doing proper genealogy work sooner. I could have gotten so many more stories of long-gone relatives, and saved a lot of time looking up the identities of those relatives if I’d asked the right questions of the people I knew who knew them. By the time I started doing proper genealogy, I was eager for information on my great-grandfather’s grandparents, whose names I did not know, and who I only had a couple of stories about. I tried to ask him, but he had dementia by then, and could only tell me his grandparents were named “Grandma” and “Grandpa,” and couldn’t tell me more stories.

His children never thought to ask these questions when they were younger, so they had nothing to tell me. It took me nearly four more years before I found out those names, as well as their birth and death dates, and even a photo of one set of his grandparents, and I discovered these things when I was helping to clean out his house after he died. You can’t go back in time and begin genealogy sooner, of course. But, I would recommend you begin as soon as you have an inkling you might be interested. Get at least the basic names, dates, and stories from your older relatives while they are still able to give them to you, and follow up on the research later. The research will always be there, but the first-hand information from the people who knew them won’t. Get it while you can.

When I first began doing genealogy, I didn’t know anything about research methods beyond talking to older relatives. I bought a family tree book, and went around to all my older relatives, asking them the appropriate questions about the identities of their parents and grandparents, and any childhood stories they cared to share. But I literally knew nothing else. I didn’t know how to expand on my initial research, which was frustrating. I went to the local genealogy library and had no idea what to do with those microfiche and microfilm machines, or even how to find the right books to take me further back in my family history.

I would start reading beginning books on genealogy research methods, and then go out and put those methods into practice, so I would learn hands-on how to use them. I could have brought my research further sooner if I’d known. It wasn’t until several years later when I made friends with a fellow genealogist with a lot more experience than me that I learned about the most basic things, like ordering vital records and doing census research.

I Would Learn to Cite My Sources (and Actually Do It)

Ah, citing sources. One thing most genealogists know they should be doing, but very few actually do. When you’re just starting and only have a little bit of information, you just naturally assume you will remember where you obtained it or who told you. That kind of thing gets a lot harder to keep track of the more information you gather, as you become more adept at your craft. You may look back at an early piece of research years later and have no idea where you got it, or if it’s even correct. Get a book on citing sources when you begin your genealogical research and use it. Citing sources may seem like a chore at first, but you will be so glad you did it later. And, when you make it your regular practice, it will eventually become second nature to you, and much easier to do.

I Wouldn’t Rely So Much on Published or Online Genealogies, or Family Lore

I relied a lot on published genealogy books, online genealogy, and legends about my ancestors that were told to me as a child when I began. I didn’t know that all of these things need to be verified before they can go in a legitimate genealogy. In fact, it is the verification that makes the genealogy legitimate. The vast majority of family tales have some major flaws in them, like a game of telephone that gets played and changed through the generations. Even genealogies that were published in the 19th century have a lot of mistakes, and online genealogies are often full of them, as people copy other people’s work without verifying it. Don’t make that mistake. You don’t want to have to re-do an entire line of your genealogy when you find out the third-party work you relied on was incorrect (yes, I had to do that once).

As an example, there was family lore of my great-grandmother on my mom’s side being from Germany. I never met her, so I couldn’t ask her. I just assumed it was true. But, when I looked further into her history, I discovered she was actually from Virginia and it was her mother who was from Germany. Her son, my grandfather, who I knew, always insisted his mother was from Germany, but it was actually his grandmother. That shows how things can get changed in a story in just a generation in a family. Verify everything, even if it’s from someone with supposedly first-hand knowledge because you never know when someone will make a mistake, or have been given incorrect information themselves. Verify, and make sure your family tree is accurate the first time. You’ll be glad you did. 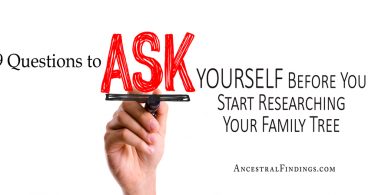