Do you have old 19th-century photos you can’t identify? You can use lots of clues to identify the people in them. Hairstyles are a method that offers powerful clues. Here is how to use them.

Do you have old 19th-century photographs that you can’t identify? If these photos were handed down to you through your family, you are probably looking at your ancestors without knowing which ones they are. There are a lot of photo identification methods you can use to give you a better idea of who these people are. The type of photograph, the style of clothes, and clues in the background of the photo are just some of the techniques you can use. You can also use hairstyles to help you narrow down the identities of your mysterious ancestors. Here’s how to do it.

The hairstyles of the 19th century were distinctive, and can usually be identified by decade on both women and men. If you can identify the era of the hairstyles of the people in the photographs, this will give you a better idea of which ancestors they may be. Making an educated guess as to their age helps you further narrow down their potential identities. If you know where the photos were taken, that gives you another clue, and knowing what side of the family the photos came from offers further clues. It all starts with identifying the era by the hairstyles of the sitters in the photographs, though. Here are the basic 19th-century hairstyles in the age of photography and when they were popular. Use this information to help you get started identifying your ancestors (remember, the age of commercial photography started in 1839).

1839-1865 — From the mid-century to the end of the Civil War, men’s hairstyles fell into two categories. The first category was medium-long to long hair with very long mustaches, beards, and sideburns. Facial hair could include all three types just mentioned, two of them, or just one. The main defining factor is that the facial hair was long, to match the long hair.

The other category that men’s hairstyles fell into during this period was called the “a’ la mode Puritan.” This hairstyle was relatively short with no mustache. There were closely shaved sideburns that were grown far down on the face to attach to a short beard. The most famous example of this hairstyle can be seen on Abraham Lincoln.

1865-1880 — The Puritan look became all the rage, but with a twist. Hair began to be slicked back with oil or grease and parted on the side. Facial hair remained mustache-free, but with sideburns and beards like in previous decades.

1880-1890 — The slicked-back look disappeared, but hair remained parted on the side. Sideburns and beards disappeared, but the mustache came back in a short, clipped, and well-groomed version.

1890-1900 — Very short hair became fashionable. It was shaved up the sides and cut very short in the back. The slicked-back look returned, but the side part turned into a middle part. Sideburns and beards were gone, but the mustache remained as an optional hairstyle feature. If a man chose to wear a mustache, it had to be the “walrus” mustache, which was a long, bushy mustache that hung down long on the sides, almost to the chin in extreme cases of this uniquely 1890’s style.

1839-1860 — The chignon was the hairstyle to wear if one was a fashionable woman. Since getting a photograph taken was a big deal during this time period, it is likely that most women doing it would want to look as fashionable as possible for the occasion. There were two ways to wear the chignon. One was on top of the head, with locks of curls falling around the face and decorated with combs, feathers, flowers, and jeweled ribbons. The other way was to wear the chignon at the nape of the neck with the hair parted in the middle. This second way to wear the chignon became more popular closer to 1860.

1870-1880 — Curls were the thing during this decade. Metal hair curlers were worn at night to keep the hair curly during the day. The curling iron was invented in 1872, which included two metal tongs that could be heated on any available heat source. This eliminated the need for nighttime hair curlers and allowed hair to be curled in a variety of new and interesting ways. Women got very creative with the way they designed their curls during this decade.

1880-1890 — This was the decade of bangs. Considered something only loose women would wear in the past, bangs went mainstream among progressive, modern women in the 1880’s. Bangs were short and curled, with the rest of the hair being worn in the top-of-the-head chignon and parted in the middle.

1890-1900 — This was the original decade of “big hair.” The pompadour became all the rage. This was a hairstyle with the hair all piled high on top of the head, with loose curls hanging down to frame the face. The higher the hair went, the better as far as fashion was concerned. Women purchased hair pads to wear under their hair to make it go higher, and also saved their own hair from their brushes to weave into hair pieces they could use to raise their hair even higher.

So, now you know the main hairstyles for men and women of the 19th century. Look for these hairstyles in your 19th-century photographs to give you an idea of the decade the photo was taken. This gives you one more important clue as to the identity of the person in the photo. 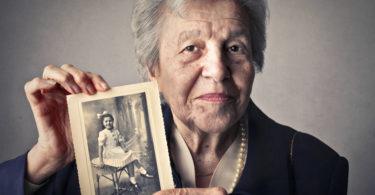