Do you have Quaker ancestors? If so, your genealogical research will be much easier. Here is the story of the origins of the Quaker religion, as well as how to research your early Quaker ancestors.

Quakers call themselves the Religious Society of Friends. They were given the moniker of “Quaker” by other Christian denominations who derided the writhing and dancing in religious ecstasy that was common in the early days of the group. While there are several different Quaker denominations today, they all come from the same first group and share the same values the original Quakers taught.

These values can be summed up in the belief that each human has the ability to access the spirit of God that is within every person. Because Quakers believe that God is in every person, and each person can access God within them without the intercession of priests or pastors, they have a general priesthood of all believers; each member of the Quaker church is a priest within that church, and can teach others and give testimony, even women, and children, which is quite unlike most other denominations of Christianity.

Quakers also avoid creeds and hierarchical structures. The different Quaker denominations that exist today include evangelical, holiness, liberal, and traditional. Original Quakers had meetings with no planned services; most of the meetings were held in silence, until (and if) someone felt moved by God to say something. There are Quaker denominations who still worship this way today, while others have a prepared message given by a designated pastor, and sometimes singing, as well.

Quakers began during the English Civil War (1642-1651) when many religious groups that dissented from the ruling Puritans and the rival Anglican Church of England emerged. George Fox was one of these people. He had his own religious revelation that there is one Jesus Christ who can speak to “thy condition,” and afterward believed it was possible to have a direct experience of Jesus without the involvement of any ordained clergy. George Fox began traveling around England preaching this new religious testimony, then brought it to the Netherlands and Barbados. Because Fox taught that Jesus came to Earth to teach people personally, that he expected others to continue this individual, personal teaching. Quakers came to consider themselves the restoration of the true, original Christian church.

The Quaker religion caught on with great popularity in England and Wales, though the dominant Protestant establishment viewed them as blasphemous, and an unacceptable challenge to the nation’s social and political order. They were persecuted through various acts beginning in 1662, but this persecution ended with an act of toleration in 1689.

Meanwhile, George Fox’s followers made their way to North America and began preaching their testimony to the English colonists there. Many of the missionaries who went were women, as women were equal priests and teachers to men in the Quaker church. The Puritans in New England proved less than receptive to any Quakers within their borders and even stopped a few would-be missionaries from getting off their ships before sending them back to England. The authorities did not want the Quaker religion to corrupt their pure Puritan citizens. However, word got out through a few missionaries who managed to get through, and via handing out Quaker pamphlets to the colonists. There were Puritan converts to the Quaker religion, and the Puritan persecution of the Quakers began in North America.

Many colonial Quakers were imprisoned, fined, whipped, mutilated, set in the stocks, tortured, and banished from Puritan-controlled colonies. Those who were forced to leave, or who wanted to leave for more tolerant pastures, usually went to Rhode Island, which was set up as a colony where any Christian denomination was welcome. Though the Puritans enacted a death penalty for any Quaker caught on their third entry to a Puritan colony after being banished, only four were ever executed, and these were three men and one woman. The woman, Mary Dyer, has a statue erected in her honor in Salem, MA.

Eventually, the Puritan authorities were ordered by the English king to stop their persecution of Quakers, and members of the group became tolerated, and even accepted, in most of the colonies. One colony, Pennsylvania, was even established by a Quaker, William Penn, and governed on Quaker principles.

Over the centuries, Quakers have come to be known for many things that make them stand out from other religious denominations. Some of these defining characteristics include:

The early Quakers advocated boisterous and unruly behavior in order to get attention, to point out the fallacy of the regular Protestant church, and to get converts. By 1700, this behavior was no longer encouraged, though the use of spontaneity of expression during meetings was still a part of their worship. Later in the 18th century, the Quakers began what is known as the Quietist period, where they became a more inward-looking religious order, and left off most of their conversion efforts. They also outlawed marrying outside the faith. Those who did would be ex-communicated. Their numbers dwindled in America and Great Britain but reached a point where they remained steady, though they were lower than they had been in the beginning. The formal name of the Quakers, The Religious Society of Friends, was adopted during this period and has been used ever since.

If you have Quaker ancestors, you are in luck, because Quakers are well known for keeping excellent records. There are detailed records of births, deaths, and marriages of Quakers going back to the early 1700’s. Most have been microfilmed by the Mormons and are available at their regional family history centers. These records can also be found on numerous genealogy websites, or even at Quaker churches themselves. Quaker cemeteries abound in New England, though the early members of the church did not believe in headstones; you may not find any stones until the mid-1700’s and after. There are also many ancient Quaker churches going back to the early 18th century that are still in use. Quakers are one of the easier religious denominations to research, even if someone left the religion either by choice or ex-communication because those events are recorded, too, as are the movements of early Quakers from one church to another. You shouldn’t have any trouble finding information on your early Quaker ancestors. 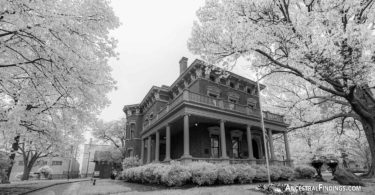