Do you know who is who in the Wars of the Roses? There were many players in that infamous war. Here’s what you need to know about one of them… Henry VI

Henry VI was a key player in the Wars of the Roses. In fact, the roots of the war began a century earlier with Henry VI’s grandfather, Henry IV. Henry IV overthrew his cousin, Richard II, from the throne. They both shared a grandfather in King Edward III, each being a son of a different child of Edward. The root of the conflict of the war was which branch of the family had a better claim to the throne. While the line of succession passed peacefully from Henry IV to his son, Henry V, and to his son, Henry VI, it was during Henry VI’s reign that the rival branch of Edward III’s descendants came forward and stated they had the better claim to the throne. This was the beginning of the war.

Henry VI was born in 1422, the only child of King Henry V and his queen, Catherine of Valois. He was heir to the throne of England from birth, and was also born during the waning years of the 100 Years War between England and France. His father, Henry V, was a hero of that war, and is considered one of England’s last warrior kings. Henry V died of dysentery while on campaign in the 100 Years War, leaving Henry VI the new king of England at only nine months old. Fortunately, his father had brothers, so the boy king had lots of powerful men to run the country for him and advise him during his youth.

Incidentally, Henry’s mother, Catherine of Valois, became a beautiful young widow at the age of only 21, and soon found love again in the arms of her Welsh squire, Owen Tudor, with whom she had at least three children (though some historians say it was as many as six). They initially had a secret affair, but eventually went public with it and got married, causing a great scandal, and the passage of a new law that said any royal woman could not get married without the permission of the king. Catherine’s children with Owen Tudor became Henry VI’s half-siblings, and Henry Tudor, who was the the son of his half-brother Edmund Tudor and thus Henry VI’s half-nephew, eventually became King Henry VII and began the Tudor royal empire in England.

Henry VI was also technically King of France for a short time as a small child, as he was the only legitimate male heir of his maternal grandfather, Charles VI, and France, unlike England, did not allow females to rule on their own. The throne of France was eventually given to a nephew of Charles in a treaty with England.

The 100 Years War went on throughout Henry VI’s childhood, being managed by his uncles, and finally ended in 1453, when Henry was 31 years old. By that time, Henry had married his grandfather Charles’s niece, Margaret of Anjou, and was ruling England on his own. Henry and Margaret negotiated a lasting peace with France, with Calais being England’s only remaining French territory, where it once had dozens. The 100 Years War was over, but a new one in England was about to begin.

Henry VI and Margaret of Anjou were popular rulers when they were a young married couple, known for enjoying good parties and being benevolent, merciful, and generous with the people of England. However, they did not conceive a child for their first seven years of marriage, which put the English people on edge, wondering if there would be an issue with the succession. Shortly before Margaret announced her pregnancy at last, Henry VI fell into what would be the first of his many mental health episodes, where he was either mad or catatonic. In this first instance, he was catatonic for more than a year. Margaret gave birth during this time, and Henry VI was not able to verbally acknowledge the boy as his son. According to English custom, the acknowledgment of the king in order to be considered legitimate. The new prince, Edward, was left in limbo for the time being.

While Henry was suffering from madness for the first time, Margaret tried to keep it a secret from all but their closest advisors. However, Henry VI’s cousin, Richard of York, from a rival branch of Edward III’s family, suspected what was going on. Henry eventually recovered from his bout of madness and acknowledged his son, but he did not stay well long. His second bout of madness was not as easily hidden, and Richard of York took over the running of the kingdom from Margaret, who fled with her son into the countryside. During her absence, where she took refuge in Scotland Richard of York exacted a promise from Henry VI to name him as his heir, instead of Henry’s own son.

Margaret of Anjou was a warrior queen and not one to let her son’s birthright be taken from him. When Henry VI was well again, she came back and saw to it Richard of York was banished from court and from the king’s council. It was only a temporary victory, however. Henry VI’s bouts of madness became more frequent, and Richard of York was at the ready to take control of the kingdom and the king, along with an army of his own to back him up. What followed was a constant battle back and forth between he and Margaret of Anjou for physical custody of the mad king Henry VI that eventually erupted into full war.

This was the beginning of the English civil war known as the Wars of the Roses (and, to contemporaries, as the Cousins’ War).

Richard of York was eventually killed in one of the early battles of this war, and so never got to become king in name, though he acted as king in deed a few times. His second eldest son, Edmund, was killed in the same battle as him. But, his eldest son, Edward, succeeded shortly after Richard’s death in overthrowing Henry VI and proclaiming himself King Edward IV, getting the crown his father always wanted for himself, but never managed to fully grab.

Henry VI lost the crown in March 1461 and was taken to Scotland by his wife. However, he was captured by forces loyal to Edward IV in 1465 and returned to England, where he was imprisoned in the Tower of London. Forces loyal to Henry VI, who was referred to as Lancastrians (the name of Henry’s branch of Edward III’s family) briefly took the crown back on Henry’s behalf in October of 1470, but Henry lost the crown again to Edward IV’s forces in April of 1471. He never got it back. His son was killed in the battle that put Edward IV on the throne for good (Edward IV’s branch of the family were called Yorkists), and Margaret of Anjou was captured and kept in the Tower of London for years until her relatives in France ransomed her and obtained her freedom. She went back to France, where she spent the rest of her life as a poor relation to the French crown.

The Wars of the Roses raged on until 1485, when Edward IV’s brother, King Richard III was killed on the battlefield and lost the throne to the last legitimate Lancastrian heir, Henry Tudor, who became King Henry VII. Henry VII married Edward IV’s daughter, Elizabeth of York, uniting the two warring family branches and ending the Wars of the Roses. 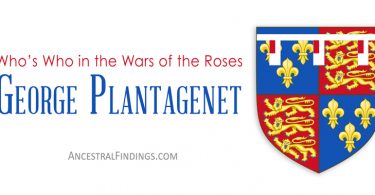