What happened to the 1890 census? It may be gone, but that doesn’t mean you have to miss out on 20 years of your ancestors’ lives. Use these records instead.

The 1890 census is a source of constant consternation to genealogists. The United States has taken a national census every 10 years since 1790. Up until 1840, only the names of heads of households were recorded, along with the number of every one of each gender who fell into certain age groups. It was harder to trace families with earlier censuses, but not impossible. Beginning with the 1850 census, the names and ages of everyone in the household were recorded. This was a vast improvement, and new information on each family member was added with each census year.

That information painted a big picture of the family that genealogists continue to find extremely useful today.

The 1890 census promised to provide even more information on our ancestors, and it did. Unfortunately, almost all of the census returns from that year were destroyed in a fire in the U.S. Commerce Building in Washington, D.C. in 1921. That led to a public outcry for a National Archives to preserve important national documents, and the United States did eventually create such an archive. However, it was too late for the 1890 census. Only fragments of it survived the fire. If you are very lucky, some of your ancestors may be in the surviving fragments.

Fragments that survived came from scattered counties (no records from an entire state survived) in the following states:

You can search these surviving 1890 census fragments online at Ancestry.com. They are also available on microfilm from local branches of the Church of Latter Day Saints (you’ll have to order them, then return them when you’re done, and there are no indexes… only Ancestry.com has a searchable index).

Where Can You Find Information on Your Ancestors in 1890?

If your ancestors didn’t live in one of these counties in 1890, that doesn’t mean you won’t be able to find out anything about them during that time. Many beginning genealogists get frustrated with the 20-year gap in census records from 1880 to 1900. A lot can change in a family at that time, after all. The good news is that there are alternate record sources that can help you fill in those blanks. Among them are:

These are some of the best sources for discovering ancestors in 1890 and in all the years between 1880 and 1900. Most cities of moderate to large size put them out starting just after the Civil War. You will often find listings for entire families, or for heads of households with other family members listed as living nearby. You’ll discover their street address, and usually their occupation, as well.

If your ancestor fought for the Union in the Civil War and was still alive in 1890, you will find him in the 1890 Veteran’s Census. Unlike the regular national census, this one was not destroyed, as it was kept in a different location at the time of the Commerce Building fire. The Veteran’s Census will tell you where your Union veteran ancestor is living in 1890, as well as some basic information about his war service, along with his current age and occupation.

The loss of the 1890 census was a great one for genealogists. It contained information on our ancestors at that time that can never be recovered. Fortunately, there are additional avenues of research we can pursue to put the pieces back together. If you are frustrated about the lack of 1890 census information, try some of these alternate record sources. You may find exactly what you were looking for in the lost census. 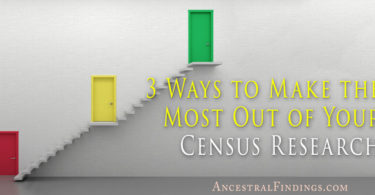