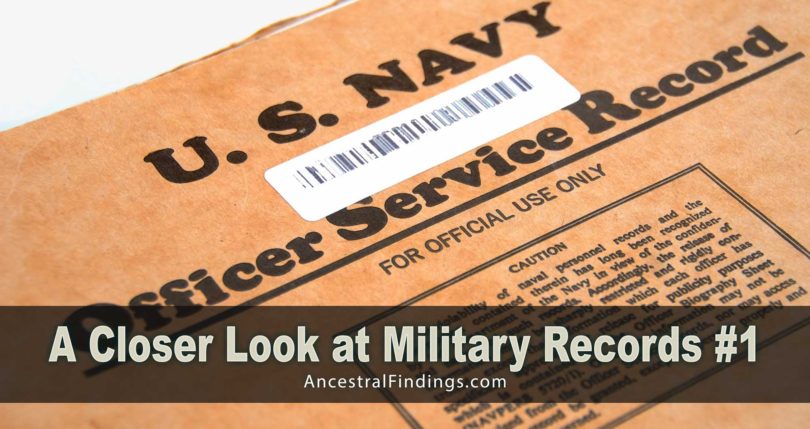 Military service is built into this country’s history. The service of hundreds of thousands of people over the past two and a half centuries has generated records that can be used to improve one’s family tree. There is a wealth of genealogical information in these records. This is an introduction to what you need to know about military records in your genealogy.

The United States has been involved in several declared wars, and numerous military actions (undeclared wars that were wars in all but name) since its founding. Hundreds of thousands of American men, and tens of thousands of American women, have served in these wars in some way. Most families can count at least one military ancestor among their ranks. The service of these people generated records that can tell you a lot about that person, and even entire generations of your family on those particular branches. This is what you need to know about military records in your genealogy research.

You can also write to the National Archives (or go there in person) to look for military records. You will need accurate information on your ancestor’s name, what war they served in, and what branch of the military they served in. The people at the national archives will then be able to use this information to direct you to the correct record collection, and you will be able to search that collection for information on your ancestor. Most of the National Archives collections aren’t indexed by name yet (though they are working on it), which makes searching online much easier.

There is a record repository in St. Louis, Missouri that houses records from WWI and WWII (as well as Vietnam, though it was not an official war). Most of the records in that repository were destroyed in a fire in 1973, which is a shame, because the detailed service records of the soldiers were kept there. Yet, you can write to the repository and ask if the medical file is still available, as a lot of the medical files still are there. You can often piece together a military history for an ancestor, and add valuable information to your family tree, simply by using the medical record for a military ancestor.