Researching your German ancestors takes knowledge and ingenuity. It is not like researching ancestors in America.

Before becoming unified as a single Germany, the area now known as Germany was a confederacy of kingdoms that worked closely together in trade and government. These kingdoms (and a few duchies) included:

Each of these areas had its own methods of keeping records and laws regarding the keeping of such records. Looking for your German ancestors means knowing where they originated in the area that is now Germany.

Even that knowledge may not be enough to lead you to the records you need. Germany did not remain a united nation for long. Some parts of it were given to Denmark, France, and Belgium in 1919. If your ancestors lived in one of those parts, you won’t be looking in Germany at all for your ancestors’ records. Further, the country was divided into two Germanys after World War II, and some parts were given to Poland, Czechoslovakia, and the USSR. Although Germany is once again one nation, the parts that were given away to other nations are largely still part of those nations and will be the places you will need to go for records.

So assuming that you are just beginning your German genealogy search and don’t know the origin points of your ancestors within the area that encompassed the original German kingdoms and duchies, how do you even begin to know where to start looking? The answers are simple if you take them one at a time. Go about this methodically and in the proper order, and if you’re lucky, you will soon be unearthing a mountain of information about your German ancestors that you never knew existed.

Start With What You Know

In every case, this will be you. Starting your search with yourself is your basic building block in researching German genealogy. Take stock of what you know about yourself. Who are your parents? Who are your grandparents? What are their names, dates of birth, dates of marriage, and places of birth? Are any of them from Germany? If so, where? Do you know anything about any of your great-grandparents? Take each line back as far as you can with the information already available to you.

If you know one or more lines originated in Germany, but don’t know with who, use the ancestor you can trace back the farthest and learn all you can about that person and his or her children, siblings, parents, grandparents, and more. Each generation back you are able to move, the closer you will come to discovering the German immigrant.

Discovering the German Origin of Your Family

If you didn’t already know the identity of your German ancestor when you started, you will need to use a variety of methods to discover it. Talk to your oldest living relatives about what they know. Look at census records and take note of the listed birthplaces of your direct ancestors. Order birth, death, and marriage records of your known ancestors, and look for names and birthplaces of parents listed on these records. You will eventually uncover the German ancestor.

Once you’ve done that, the next step is determining the birthplace in Germany of that ancestor. You definitely need to know the kingdom or duchy if your German ancestor was born prior to 1871. Ideally, you should also try to discover the city or village within that area where your ancestor was born. The more specific you can get on location, the more likely you are to be able to find records on that person.

There isn’t a central location for German vital records, so knowing the birthplace of your immigrant ancestor as specifically as possible is really crucial to getting good genealogical results. You will probably discover the first pieces of information on your German ancestor in American records.

Once you’ve determined the identity of the immigrant ancestor, you will be able to look for things such as immigration records, marriage, and death records, birth records of that person’s children, obituaries, census records, and church records. Sometimes, old newspaper records can give you clues or outright information on that person’s place of origin in Germany.

Be sure to leave no stone unturned in American records once you’ve found your immigrant ancestor. This person is your key to discovering everything about your German roots, with a rich family history in Germany that may go back centuries (or even beyond the use of written records).

Determine Where to Look for Records

You may be able to get some records just from knowing the kingdom or duchy of origin of your immigrant ancestor. However, to get to the really good information (and possibly more plentiful information), you really need to know the city or town where this person was born. Many important genealogical records, such as parish records, are kept on a local level.

You need to narrow down the town through American records, using the methods previously discussed. Once you’ve found it, you must locate it on a map. This is to see if the city or town still exists. If it does, you know exactly where to look for records. If it does not, look at older German maps to see where the town was, and compare it to modern maps to try to deduce what the town is called now.

See if the town’s location is different now than it was when your ancestor lived there. This often happened through changing borders or through giving away territory to other countries. Wherever the town is now, or the place where it used to be, is where you will find any records that may exist on that person. Those records will open up your whole German family to you.

Sources for Genealogy Records in Germany

Once you’re ready to start looking for records in Germany, you will definitely want to check out the local parish registers. These go back to the 1400s in some places and will give you information on your immigrant ancestor’s birth date, place, and parents. Once you have the parents’ names, you can look up information on them, and so on, as far back as you are able to keep finding records. Some German parish registers even contain registries on entire families, which is terrific if you can find such a thing for your own family.

Other places to look for records in your immigrant ancestor’s place of birth include:

Doing German genealogy research isn’t as difficult as it sounds. All you really need to do is discover your immigrant ancestor and determine their birthplace in Germany. After that, finding more records on that person in Germany and learning about your other German ancestors should be a simple matter of following all available paper trails.

Knowing a little bit about German history and the way borders changed definitely helps make things easier. It certainly helped me. I discovered my German ancestor came from a region that was later given to France. That meant that all the records from that region were now in France, and that was where I needed to look for records. I shifted my search from Germany to the area of France that absorbed my German ancestor’s town, and that is where I found the records I needed to learn about my long line of German ancestors and their lives.

With millions of people in the United States having German ancestry, the chances are strong that you will find a German ancestor in your family tree. Don’t let a few challenges at the beginning of your search deter you from continuing it. You can discover your German ancestors. Just keep at it, keep searching, and you will be rewarded with the rich family history information you’ve been after all along. 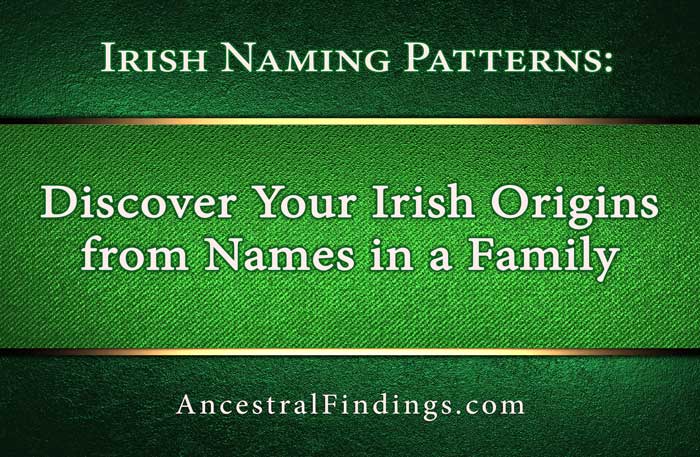