The 1820s were a decade full of change and innovation in a number of ways. Transportation, culture, fashion, science, and more all made important changes and discoveries. These are some of the highlights of the decade that your ancestors might have known about, experienced, or enjoyed.

No doubt about it, the 1820s were an interesting decade. This was not just true for the United States, but for the world. The invention of the railroad, improvements in the textile industry, early experiments into photography, and more all captured the attention of our ancestors in this decade. Trade between China and the rest of the world, particularly Europe, opened up significantly. Wars between nations wanting to colonize other places and the people in those places who did not want to be colonized broke out around the globe. Many other countries gained independence from earlier colonizing forces, such as Peru, Bolivia, and Brazil.

These are some other things your ancestors would have probably known about and maybe even experienced or enjoyed in the 1820s.

Society and Science
The Missouri Compromise became law in the United States. This law stated which newly admitted states could practice slavery, and which could not.

Egyptian hieroglyphics are deciphered for the first time by Thomas Young and Jean-Francois Champollion using the newly discovered Rosetta Stone.

Galileo’s book, Dialogue, is finally taken off the list of the Catholic Church’s banned books after about a two-century stint there.

The first fountain pen with a replaceable ink cartridge is patented in France, by a Romanian inventor named Petrache Poenaru.

The first friction match is invented.

The accordion is invented.

Transportation
The railway was invented, with the first one opening in England in 1825. It was called the Stockton and Darlington Railway. The Erie Canal also opened this year, giving people easy ship passage from Albany to Buffalo in New York, and from Buffalo, there was easy access to the sailing routes of Lake Erie.

The Venus de Milo sculpture, a famous ancient Greek sculpture in partial ruin, but still beguiling, was discovered on the island of Melos.

The sport of rugby was invented.

Fashion
The world of fashion was in full swing in the 1820s, with European fashions leading the way. The classically influenced Regency styles of the past couple of decades (with their loose and free fittings and short sleeves) gave way to full skirts, visible corsets, and long, loose sleeves. This look, and variations of it, would dominate the world of women’s fashion for the rest of the century.

As far as men’s fashion went, a particular type of coat with broad shoulders, puffed sleeves, and a narrow waist became popular. Pants were worn for everyday business and casual wear, while breeches (a looser, puffed version of pants that was un-tailored in appearance and fit) were worn in court and for farm labor, as well as for any country outing. 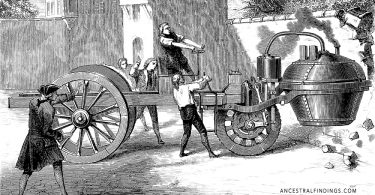 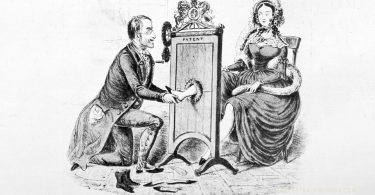